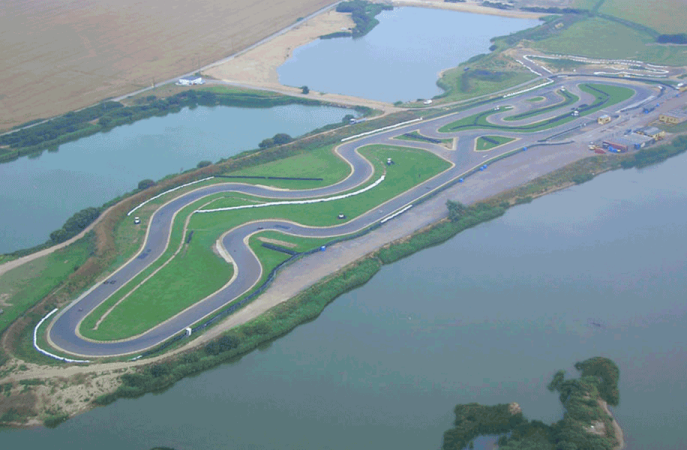 If you are coming from the London or further north, then head down the M20 to Junction 10 and take the A2070 in the direction of Lydd (although I can't remember what it is signpotsed as). Pick up the A259 at the roundabout towards the end of the A2070 and this is the Rye/Hythe road. Follow this road until you come across the B2075 that is signposted to Lydd and Lydd Airport. You go pass the airport (on your left) and then head over a small bridge on the entrance to Lydd itself. Immediately after the bridge is a left-hand turn that takes you down to a roundabout. Go straight over this roundabout and take the first slip road on the left. Go down this road for another 1 mile (approx.), following the signs for the Windsurfing school. Eventually the road becomes more of a track than a road and on the right you will see the Leisure Park. The circuit is part of this complex and is signposted once inside the complex 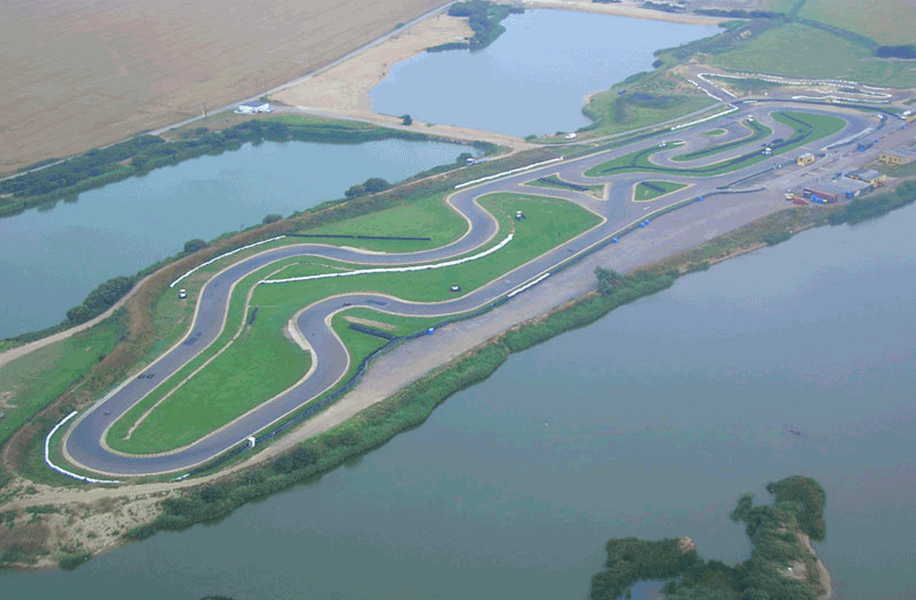 An introduction to Lydd

CLUB 100 has been using the Lydd facility since early 1996 when the existing circuit was extended to 1250 Metres in length. The circuit offers the organisers a number of options in terms of layout and CLUB 100 use both the tricky infield section (i.e. using both hairpins) and the shorter option of running the whole of the back straight (the track guide below by Stuart Symonds covers both options).

The circuit is really popular with the drivers as it is both quick and open, hence allowing for some great racing and overtaking. The key to the circuit is a good exit from the first chicane and onto the back straight which allow the driver a good chance of outpacing the driver in front to the next corner. It is also possible to get a good exit from the second chicane and make a move into the top corner or into the right hander that follows the top corner. In fact, there are so many overtaking opportunities the drivers are spoilt for choice!

The rolling up laps take place on the oval loop of the pre-96 track with the drivers using the cut through at the first chicane and then using the back straight to make up the roll-up lap. The Endurance, however, will probably use the whole circuit rather than just the oval used by the Sprint drivers. The pits entrance is on the very last corner and drivers should pull to the outside of turn 8 and raise their hands before entering the pit lane which is situated at the start of turn 9. The exit from the pits is just before turn one although during the Endurance event, we use the extended Pit Lane that exits onto the circuit just after the first chicane.

The starts for the Sprint races will be done using the starting lights and the pack will have to contend with the fast approaching first corner which is a chicane. Many a driver’s race has ended here on the first lap, so extra care is needed in the Sprint event to ensure all the drivers get through the first corner before commencing battle down the straight into turn two. Other key danger spots on the track (in terms of regular coming togethers!) are the hairpins on the infield section (when used) and the corner at the end of the back straight. This is a very fast corner and drivers should ensure they have won the corner rather than just lunge up the inside of those they are trying to overtake.

On the whole, a great circuit in a terrific setting that usually provides some great racing.

There are no upcoming events for this venue.