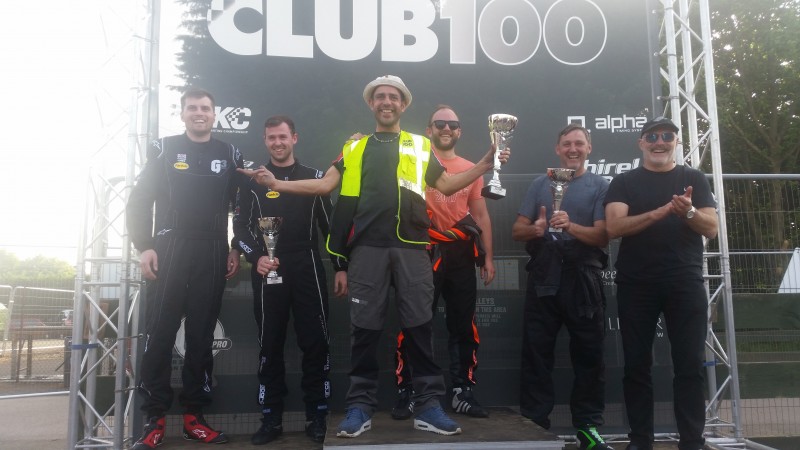 I think I might just write the next eight race reports now and get it over and done with. Still, Sav appearing on the podium made it less boring.

A third of the way through the 2018 season and the class 1 championship is already pretty much a foregone conclusion. Barring a viciously sudden and violently successful accident befalling Steve Hicks and Kosta Kyritsis, it doesn’t look very likely that anyone will be able to stop their dominance.

Starting seventh on the grid for the first race of the day, the championship leaders wasted no time in getting into the lead. This they managed on lap three and, from there, they never looked back. The excitement came further down the order with G3Pro making amazing progress from the back of the grid. On a circuit that is very kart dependent, they nailed the start, jumping fourteen places on the opening lap. A similarly good start for Maxx MPH Racing came to nothing as they almost came off the road twice during the race while avoiding other crashes.

Alphalive ran well at the front for a few laps before being demoted by the likes of Big Cat Motorsport, Old Men Racing, Scuderia GM and the flying G3Pro. By mid race the latter were in second but could do nothing about the leaders. The front running teams had separated into three groups, each battling hard.

Ultimately, no one had an answer for KyritsHicks and they won with a margin of six seconds from G3Pro who did an amazing job from the back. The Big Cats beat the Old Men into third place.

Racecraft and Scuderia GM started on the front row for the second race of the day, although with Team DGB starting third there was no guarantee any of them would be facing the right way by the time they reached the first corner.

Fortunately the start was clean at the front and racecraft took full advantage, taking the lead and building a decent gap to the squabbling pack behind. It was Maxx MPH who were on the move; having started thirteenth, they were sixth at the end of the first lap, fifth on lap two, fourth a lap later and this became second on lap nine. M&M were making similar progress a few places further back but all eyes were on the flying KyritsHicks as Costa came from the back and menacingly started dispatching the mid field teams.

By half distance, Racecraft were under pressure by Maxx MPH and the move was made on lap 21. Racecraft weren’t giving up, however, and they fought hard, allowing the karts behind to close up. KyritsHicks were in a similar battle with M&M so this suddenly became a four kart battle for the lead. Over the final few laps, the quartet raced wheel to wheel and exchanged places. Maxx MPH kept their nerve but left the door open at the boot, allowing KyritsHicks and Racecraft through. M&M managed to sneak through but Maxx MPH held them off across the line. The top four were covered by nine tenths of a second at the flag. Now that is what Club100 racing is all about.

If you don’t count the kart running with the clutch, this was another race dominated by KyritsHicks. Old Men racing and Team DGB were the best of the rest. Further back, what could have been a promising race for Maxx MPH again came to nothing with a kart the lacked bottom-end, leaving them as sitting ducks out of the corners. M&M and team fast Love both had disastrous races and dropped to the back of the field. Back at the front and there was a three kart battle emerging for second place in class with Old Men racing, team DGB and the Big Cats battling it out along with a handful of class 2 teams. There was a big gap then to the next gaggle of karts, led by G3Pro. They were valiantly holding off the attentions of Alphalive and Gurncraft. Scuderia GM were next up ahead of the floundering Maxx MPH, Keen As Mustard and Racecraft who were also struggling with pace.

At the flag it was another predictable result as KyritsHicks won. Old Men racing held off Team DGB for second.

G3Pro started on pole ahead of Maxx MPH who needed a good result to have any chance of a top three result. Unfortunately they were lumped with the same kart as in race three. The kart was deemed good enough to race with but this proved to be a mistake and they sadly went backwards again. Whoops.

So G3Pro led the way but were hounded all the way by M&M and Keen As Mustard. This trio had a race long battle at the front and were rarely separated by more than a few tenths. Further back and, for once, KyritsHicks was struggling. A mistake near the start left them with a mountain to climb but they soon got into the battle for fourth with RaceCraft, Gurncraft, Old Men racing and the struggling Maxx MPH. Further back and Big Cat Motorsport, Team DGB and Alphalive were all struggling to get on the pace.

The battle for the lead was getting very intense as the laps counted down. G3Pro had the lead going into the last lap but were under extreme pressure from M&M. The latter managed to snatch the lead right at the end to take the win. Keen As Mustard came home fourth, just a few tenths further back. In fact the top three were separated by just over three tenths. More Club100 brilliance…

Although with another maximum score to count, the winner was never in doubt. However, in what was a mixed day for a number of teams, the rest of the results were up in the air. With KyritsHicks taking their fourth straight victory, it was G3Pro who finished second. Consistent results saw Old Men Racing take the final spot on the podium.