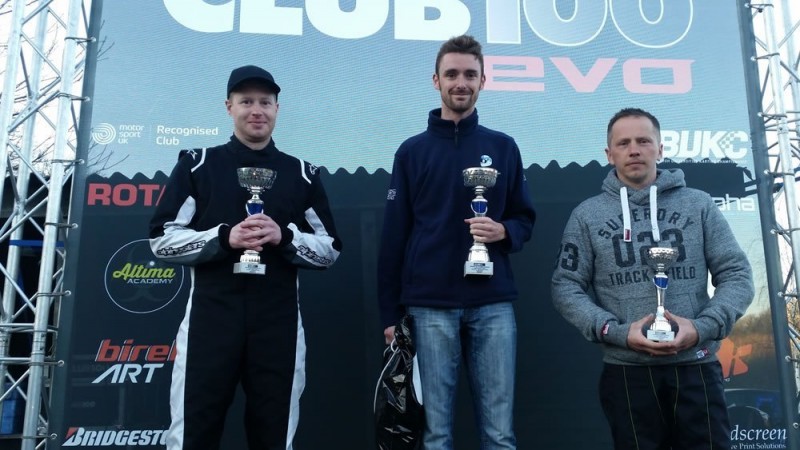 The pecking order establishes itself early in the new sprint 60 series.

2019 marks the dawn of a new era. After 26 years of running TKM engines, Club100 made the switch to Rotax over the winer. The clutch means less of a penalty for a spin or an accident as there is no need to wait around for a pusher kart. Although there’s an increased risk of expensive damage due to the exposed radiator, one would like to think it would encourage more sensible driving. Having tested the new karts in January, I can say that they are great to drive.

With the new era of karts came a new format of racing in the form of the Sprint 60 championship. Replacing the short-lived Quadrant series, this new championship follows a similar format but is designed for individuals competing in two half an hour “mini enduro” sprint races. The inclusion of qualifying adds to the spectacle.

It was Jack O’Neill who took pole in the lightweight class. Darri Simms put a great lap together to line up alongside him, less than six hundredths of a second behind. Owen Jenman was third with Ryan Sandall and Chris Brown making up the top five. There were lots of new names and faces making up the bulk of the full 35 kart grid so time will where the natural order lies.

Jack O’Neill led from pole. A blinding start from Chris Brown saw him go from fifth to second at the first hairpin. However, it soon became clear that his kart was not performing as it should and he lost grown to the leading and started holding up a train of karts. Within a couple of laps he had been shunted down the order. Ryan Sandall, Owen Jenman, Darri Simms and Jason Cole took up the challenge and began to chase down O’Neill.

Geoff Saunderson was on the move. Having qualified well down the order in fourteenth, he was clawing his way through the field and was up to fifth by lap seven. Behind him was a good dice between Andrew O’Neill, Eddie Hall, Archie Elliott and Jason Cole. Chris Brown was continuing to struggle and had fallen outside the top ten and into the midfield battle that was raging between Tim Ellis and Jacob Lewis.

Back with the leaders and Owen Jenman and Ryan Sandall had closed to within a second of O’Neill. Over the next few laps, they continued to reduce the gap by a tenth or so and, on lap 17, Jenman made his move and took the lead. The gap fluctuated as the leading pack worked their way through traffic. This had allowed Geoff Saunderson and Darri Simms to close right up. Saunderson jumped into third on lap 27, leaving Sandall and Simms to dog fight it out for the next couple of laps. Likewise, the battle further down the order was still raging intensely.

Jack O’Neill retook the lead on lap 31 and, to add insult to Jenman, he was handed a two place penalty for exceeding track limits. With a handful of laps left the top four were all separated by less than a second. Saunderson made a good move with two laps to go and got himself into second at the expense of Jenman who also lost out to Simms. The positions remained unchanged in the last two laps so O’Neill won the first race of the season followed by Saunderson, Simms and I’d imagine a rather disappointed Own Jenman who was fourth on the road but his earlier penalty dropped him to sixth behind Sandall and Daryl Snelling who had sneakily got himself from seventeenth on the grid to fifth. Archie Elliott dropped down to tenth after repeatedly assaulting cones.

With the grids for the second race being determined by finishing positions from race one, it would mean much of the same. Jack O’Neill’s win gave him the pole position and he led from Saunderson, Simms, Daryl Snelling, Owen Jenman and Andrew O’Neill. Eddie Hall made a couple of places on the opening lap and a great start by Mitchell Althasen saw him gain seven places on the opening lap. By contrast, Ryan Sandall lost four. However, he soon recovered and picked off Hall, Athasen, Andrew O’Neill and Snelling over the next couple of laps to get back into contention. Chris Brown was also on the move.

Up at the front and there was little change. Jack O’Neill continued to lead from Geoff Saunderson, with Owen Jenman a couple of seconds further back in third and fending off the flying Darri Simms who was all over the back of him. This quartet had once again pulled out a sizable gap over the rest of the field.

Down in the midfield there was a good little battle going on between Iain McGregor, Tim Ellis and Thomas Barrett. Scott Kelman, Stuart Finn, Tony Philbin, Hans Chan and Georgios Kokosis-papathanasiou – whose name I hope I never have to verbally read out – were also embroiled in a fierce battle. An off for Georgios on lap 22 sadly dropped him out of that group.

O’Neill had built up a two second lead by half distance and Saunderson was desperately fending off an attack from Jenman who had been sniffing his exhaust fumes for the whole race. Lap 22 saw a successful move. Simms was also right behind and ready to pounce. He did so two laps later, demoting Saunderson to fourth. It was a lot closer behind than it had been in the first race. Saunderson, having now dropped away slightly, was only a second clear of Sandall in fifth who was heading a train of karts comprising Andrew O’Neill, Chris Brown and Eddie Hall.

Over the final few laps, the leaders all spread out with O’Neill pulling out a gap of around three seconds over Jenman who, in turn, had a similar margin over Simms. Saunderson was five seconds further back. Behind the leaders, Chris Brown had got past Sandall and O’Neill and there was a lot of bumper rubbing going into the last lap.

At the front, O’Neill cruised to another win ahead of Jenman, Simms and Saunderson. Brown managed to hold onto fourth with Sandall, Andrew O’Neill and Eddie Hall all crossing the line within a few tenths of each other. Sadly, penalties for Sandall, Brown, Hall, Snelling and Andrew O’Neill meant the final result looked as different as a Formula 1 grid does after qualifying.

Anyway, with two wins out of two, the victor was never in doubt. Jack O’Neill took the spoils with Geoff Saunderson second and Darri Simms third. Jenman’s earlier penalty cost him a podium and he was classified fourth. A disappointing day saw Chris Brown and Eddie Hall languishing down in tenth and eleventh respectively but it looks like it’s going to be a close season with most of the top ten running very closely in terms of lap times. The new karts are just as close and evenly matched as the old ones. Yet again a testament to the continuing good work of the Club100 team. 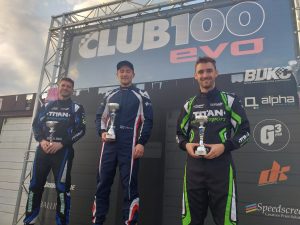 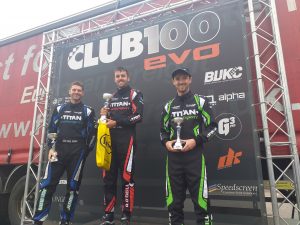 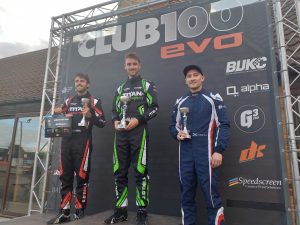 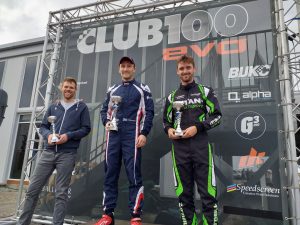 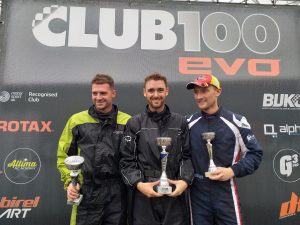 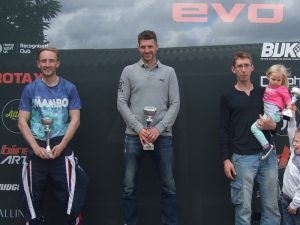 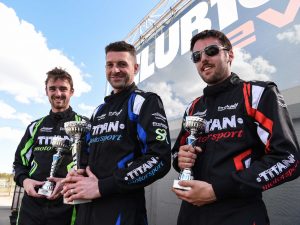 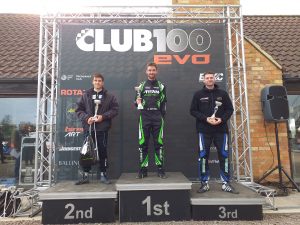 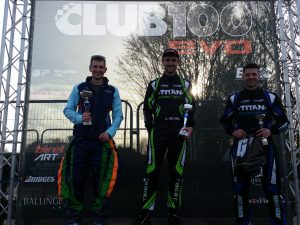 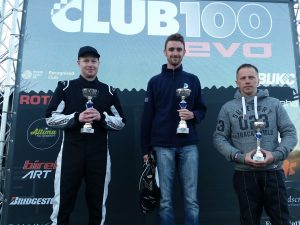