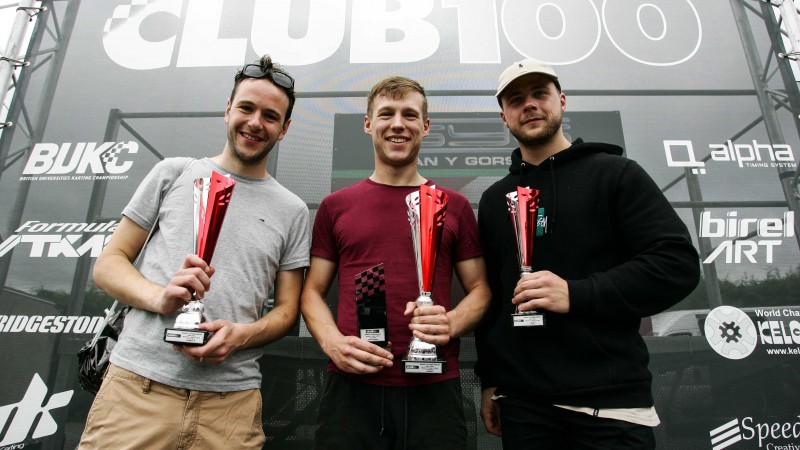 Bora da! Croeso i Glan y Gors Parc Cartio! The scenery might be somnolent but there’s nothing peaceful about this majestic Welsh track. It’s fast and spectacular for the drivers and offers great viewing for the spectators from the Clubhouse balcony. It’s not the greatest of places to get too but the rewards more than make up for the journey. To miss GYG as it’s affectionately known is to miss out on one the greatest Kart driving experiences in the British Isles. It’s a short run from the start line into the flat out right hander at Club. So important here to get a good exit because it’s’ a long run up the hill on the Dragon straight, round the right hander at the top and then on the brakes for the right handed Spoon corner. A good overtaking spot. Out of Spoon accelerating hard through the left hander and down the hill to the double apex Carousel. Another good overtaking opportunity. Then it’s back up the hill through another flat out right and into the Compression corner, an off camber right hander which is so easy to get wrong. Next it’s into the Druids complex followed by the Devil’s Elbow with its wicked dip and then into the final corner at Paddock Bend before completing the lap, hopefully in the lead! And when it’s cloudy as it was on Sunday there’s always the threat of rain to liven up proceedings. 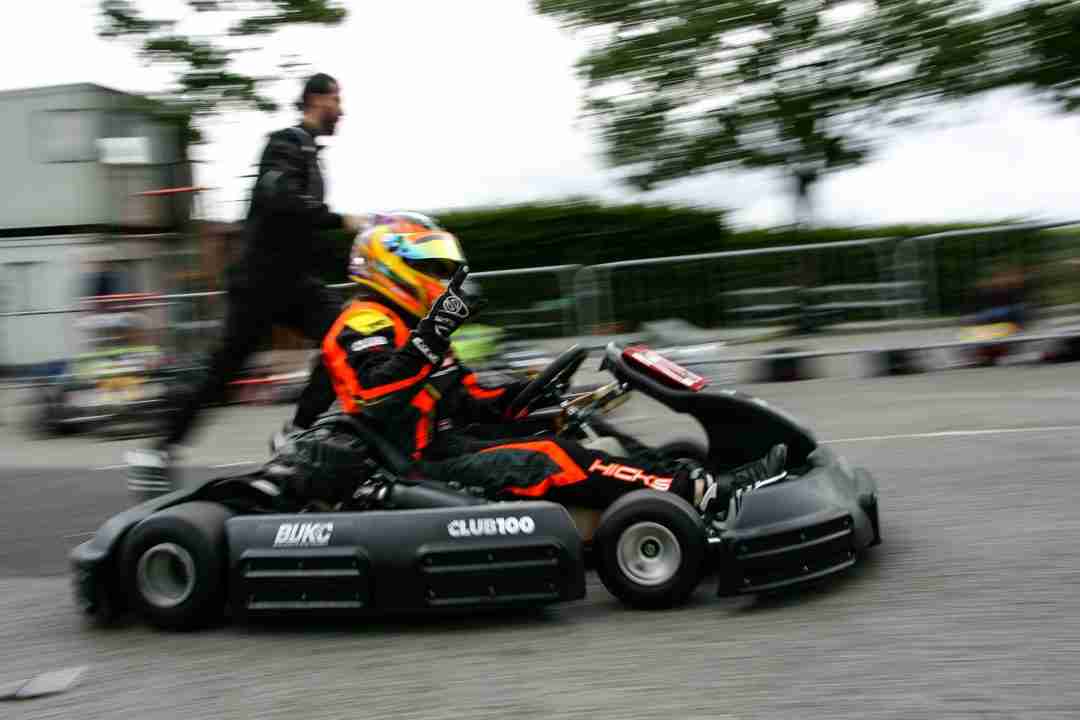 Heat 1
Two very unfamiliar names on the front row for the first heat. Heavyweights Ben Benneyworth and Nick Trafford both decided to take advantage of the Club’s generous offer on entry fees to get some valuable experience. For both it would be a baptism of fire. Behind these two we had Dan Healey and Chris Dixon with Jack Bolton and Steve Hicks on row three. Two more guest drivers, Dane Christison and Seb Algieri shared row four with Dan Truman and Tom Mackenzie completing the top ten. Bennyworth led the field away but it was Trafford who hit the front as they began the long climb up the Dragon straight. But by the end of the lap Dixon had moved to the front with Trafford still running second ahead of Hicks, Benneyworth, Healey and Bolton. Christison spun out early. Two laps in and Dixon still led but was coming under pressure from Hicks who had slipped by Trafford for second. Healey and Bolton too were homing in on Trafford who was losing out on the run up the hill to the much lighter drivers. Benneyworth too was struggling and gradually slipped down the order. He would eventually be classified fourteenth. Hicks meanwhile took over at the front and managed to edge clear as Dixon came under pressure from Healey and Bolton. Trafford was running in a very creditable fifth but had Jay Elliot and Pete O’Connor closing in. Meanwhile, Healey moved up to second and immediately began to chip away at the gap to the flying Hicks. Dixon began to fall away as he defended third from Bolton. Elliot dispensed with Trafford for fifth. Joe Holmes too was closing in as was Rob Newman. Healey kept chipping away at the leader and set the fastest lap of the race on the final tour but it was not enough and Hicks ran out the winner by just over a tenth from Healey with Bolton and Dixon next up but some three seconds adrift. Elliott took fifth from O’Connor with Holmes next but penalised down to tenth promoting Ian Blake and a returning Daz Teal to seventh and eighth. Good drives from both from lowly grid spots. Newman crossed the line next but multiple penalties dropped him to last. He would receive a stern lecture too post race. Trafford was classified ninth. He lost out badly over the last couple of laps but it was still a decent drive given his weight penalty and lack of experience at Elite level. 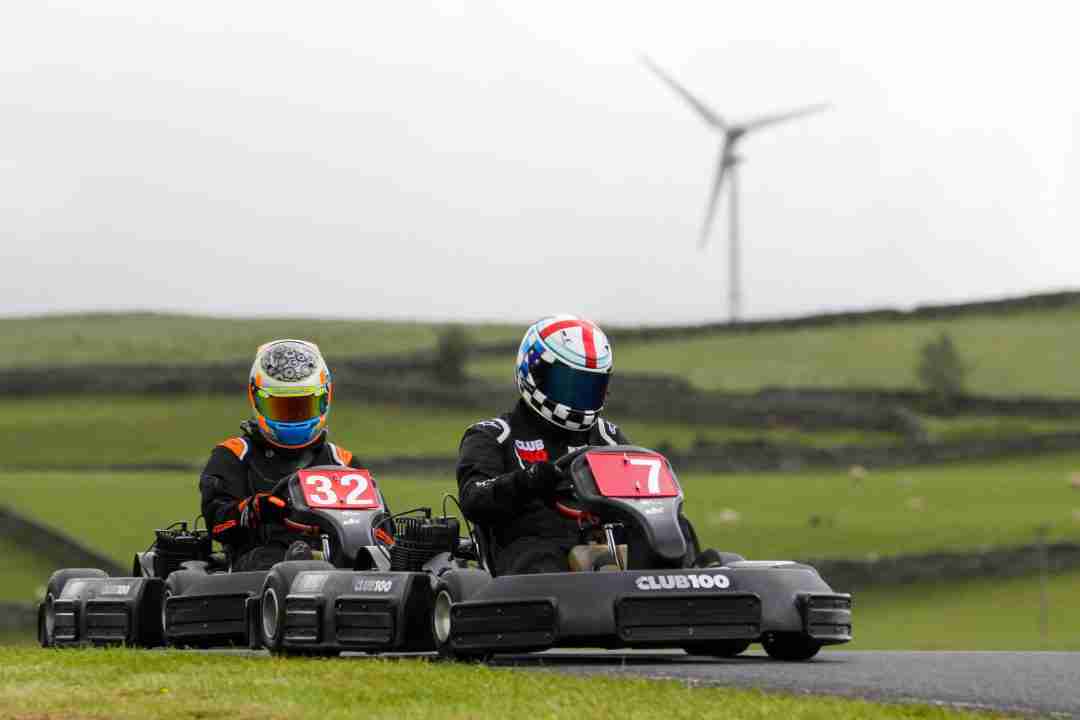 Heat 2
Mackenzie on pole from Fincham with Elliott and O’Connor on row two. Next up, Blake and Holmes from Newman and Hicks with Teal and Benneyworth completing the first five rows. A very messy start saw Fincham spinning out of second place as the field climbed up Dragon straight with what seemed like the whole field fighting over one section of track. Mackenzie too lost out. By the end of the lap Blake was into the lead chased by Newman with O’Connor third from Holmes and Elliott. Teal had also lost out dropping to the back of the field whilst Steve Hicks had made a storming start climbing from fifteenth to eighth. Benneyworth too drove a strong opening lap and was up to sixth. 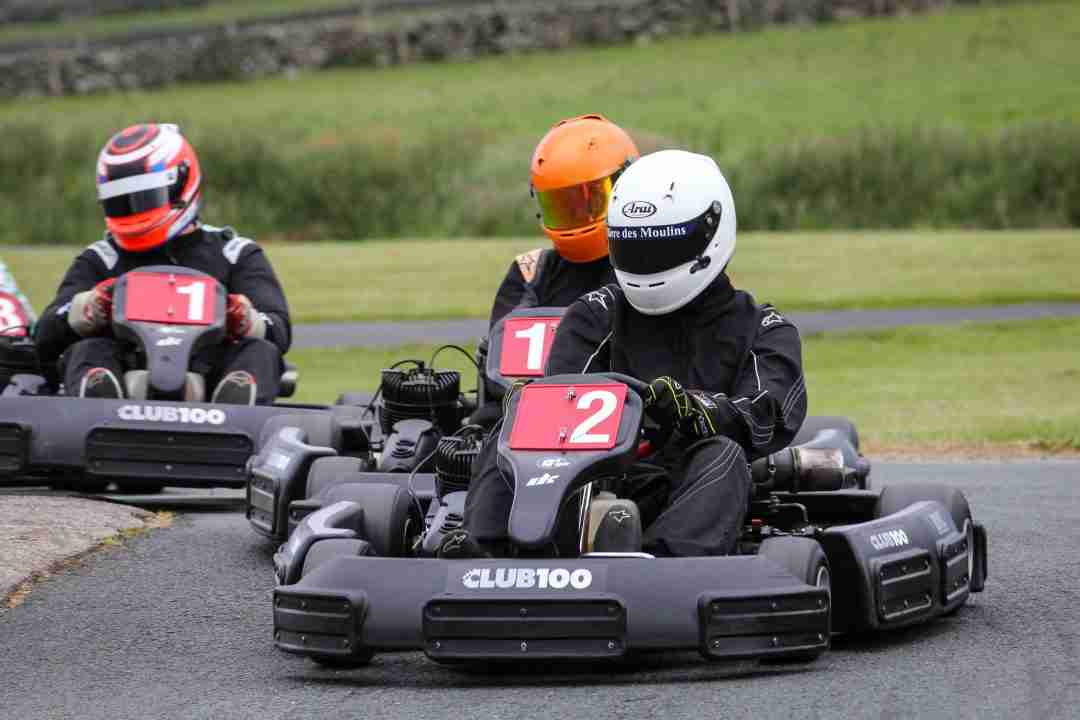 With two run Blake still led from Newman with Holmes up to third from O’Connor, Elliott and Benneyworth. For several laps the order remained the same but Newman was nibbling away at Blake for the lead. Half distance and he was through at the top of the circuit taking Holmes and a recovering Elliott with him as Blake dropped to fourth. O’Connor still ran fifth but Hicks was really flying dispensing Benneyworth and quickly closing in on O’Connor. Hicks set the fastest lap of the race and established a record as he homed in on O’Connor. At the front Holmes got by Newman for the lead which also allowed Elliott to momentarily usurp Newman. Holmes kept everything tidy over the final couple of laps to take the win with Newman second. Elliott took third holding off Blake at the flag with the impressive Hicks next from O’Connor. Healey was next from Benneyworth. Next up should have been Mackenzie but he took a cone penalty and dropped to tenth promoting Jed Hicks to ninth.

Heat 3
Truman on pole from Teal with Seb Algieri and Jed Hicks on row two. Next up Christison and Newman followed by Steve Hicks and Holmes. Bolton and Blake completed the first five rows. Truman got away cleanly but Teal lost out to a fast starting Algieri. Jed Hicks and Christison were early casualties spinning to the rear of the field whilst Holmes and Blake both made lightening starts. 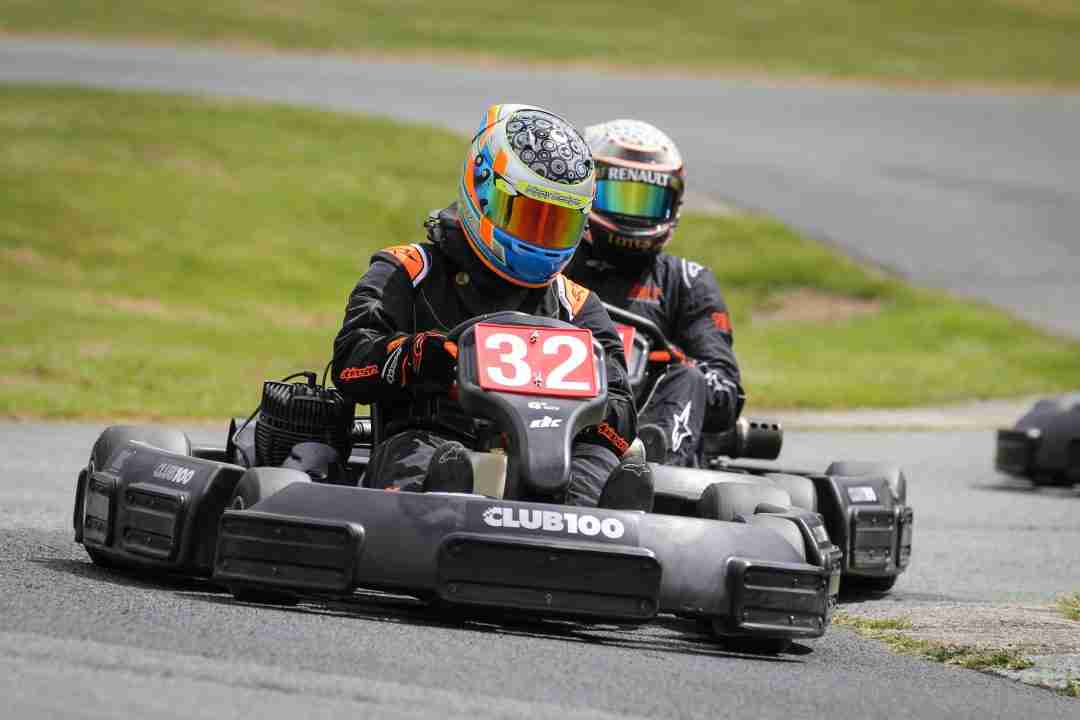 End of lap two and Algieri made a move on Truman for the lead into the final corner. He made it stick too but his glory was short lived as Holmes swept by them both for the lead. Newman too made it back through as did a recovering Teal. The front three quickly began to pull clear as Algieri defended fourth from Blake with Truman trying to stay on terms as O’Connor, Fincham and Elliott bore down. Holmes, Newman and Teal began to steadily increase the gap back to Blake in fourth whilst Algieri and Truman both dropped behind O’Connor, Blake and Fincham. There was going to be no catching the leaders though and Holmes took his second win of the day a tenth up from Newman with Teal a couple of tenths back in third but well satisfied with his drive. Blake came home fourth with O’Connor right on his bumper and a few Kart lengths clear of Elliott who had Fincham and Algieri line astern behind. Healey and Truman completed the top ten with Steve Hicks setting the fastest lap.

Final
Pole for Holmes with Elliott alongside and Blake and Steve Hicks on row two. O’Connor and Healey shared row three with Newman and Teal on four from Dixon and Bolton on row five. Holmes led the field away but Elliott’s chances of repeating his Shenington performance took a nosedive as he spun down the order allowing Blake into second. O’Connor was third with a fast starting Newman right on his tail. Hicks dropped to fifth ahead of Dixon and Teal. Holmes led from Blake, Newman and O’Connor but they were line astern and bumper to bumper. Newman made a move on Blake at the final corner but he couldn’t make it stick and lost momentum allowing O’Connor into third. A lap later though and he re-passed O’Connor into the final turn. A lap later and he made the same move on Blake. It could have ended in tears but Blake gave him some room and Newman got better traction across the line to move into second. And Holmes was only a couple of Kart lengths up the road. 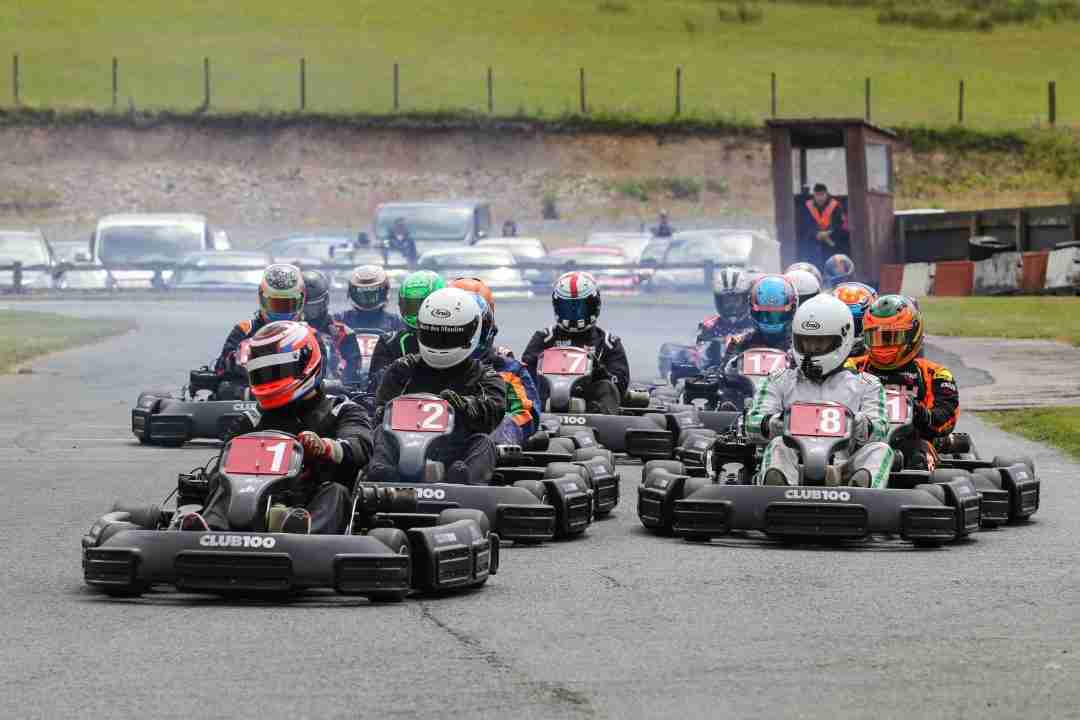 Newman quickly closed the leader down and Holmes was powerless to resist as Newman swept by into the lead. He immediately began to pull clear as Holmes had to defend from Blake. On the penultimate lap Blake got a run on Holmes through the final complex and moved up to second. But he could do nothing about the leader Newman eventually crossing the line almost three seconds to the good for his first ever Club 100 Sprint win. Blake held on for second with Holmes taking the final podium spot some three tenths clear of O’Connor with Dixon fifth. Steve Hicks took sixth and really looked as if he’d put in maximum effort in the Final with Teal seventh from Truman, Healey and Bolton. And there were no penalties…

Round up.
With five rounds gone we are now seeing dropped scores in the standings. Joe Holmes leads the Elites. A bit of a surprise that he lost out at GYG to fellow Yorkshireman Rob Newman who recovered quite brilliantly after a bad start to the day. He’s up to second in the standings and leads the Rookie runners. Jay Elliott is third ahead of Steve Brown with Ian Blake fifth. It surely can’t be long before Blakey takes a win. 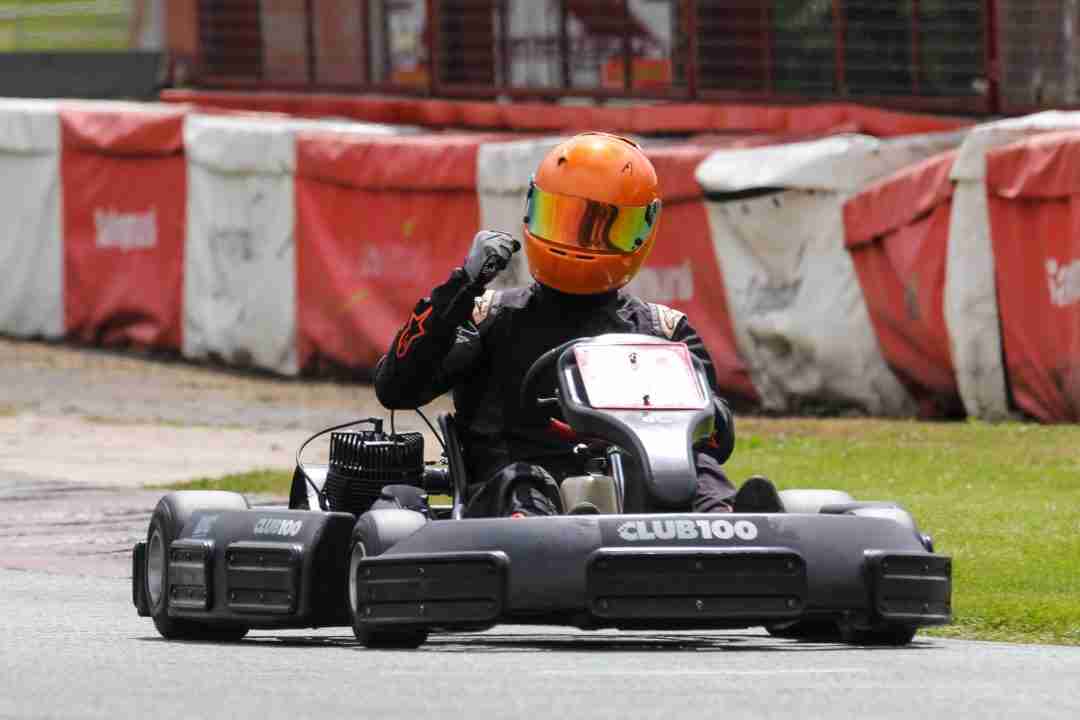 Reflections
Always a great day at GYG even when it’s wet!. Such a shame that more drivers don’t want to make what is admittedly a long journey for some. It’s well worth the trip though because it is such a fabulous circuit. Still, JV did do his best to keep the grids full and everyone I spoke too thought the special offer on entry fees was a great imitative. And no one lost out in the respective Championships.
Speaking of which, just for a bit of fun and unofficially I’ve revised the scoring for the EssexFlatPack runners. Scoring F1 style doesn’t change the order but it does tighten the field.
Trevor Randall 104
Paul Williams 89
Stuart Germon 63
Jordan Salter 61
Paul Goddard 48
Kieran Chidgzey 42
James Edwards 35
Just a bit of fun but if nothing else it makes Trevor a bit less of a runaway leader!
Finally, all our officials fulfil their duties with honesty and integrity. There are no favourites and no favours. So it was a little disappointing to see one or two drivers storming into race control to have a moan. I know emotions can run high but prima donna behaviour won’t get you anywhere. Count to ten and then approach the right official calmly if you have a beef. Club100 is not a branch of Mothercare. Whatever the circumstance acting like a spoilt brat just causes a loss of respect.

See you at Buckmore. 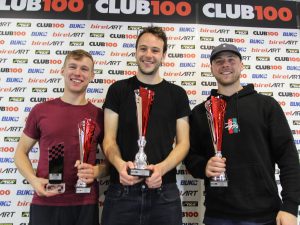 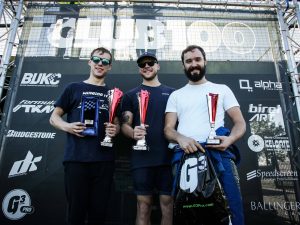 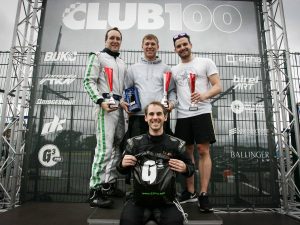 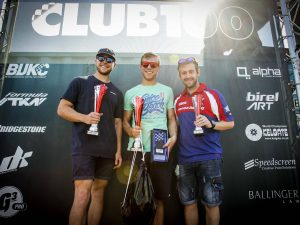 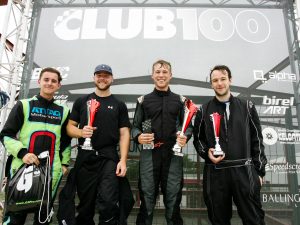 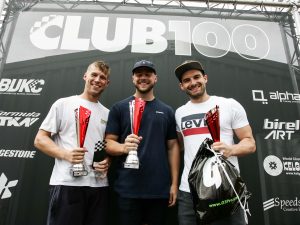 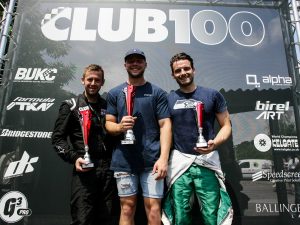 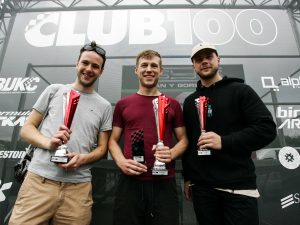 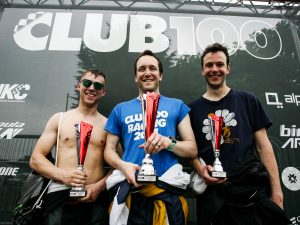 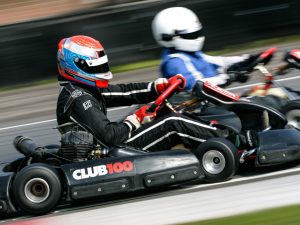 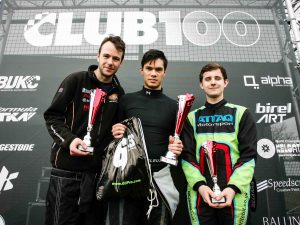 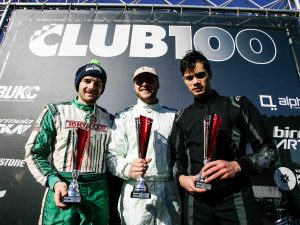