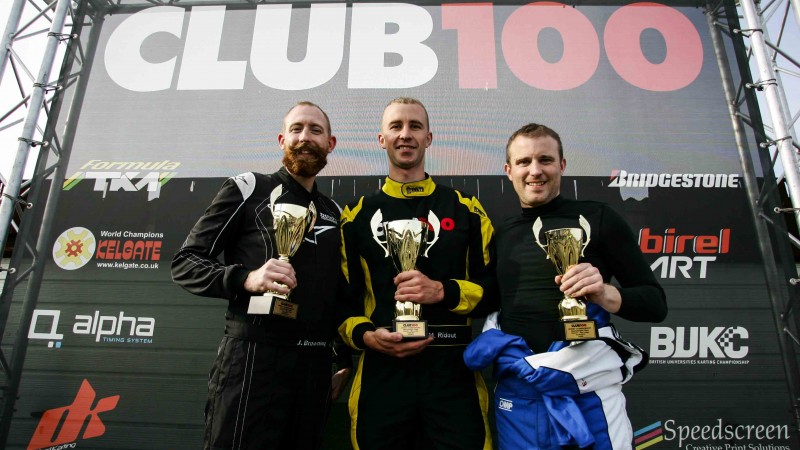 A lovely sunny morning had greeted the competitors at Red Lodge, the only circuit to run anti-clockwise in the series. My first time at Red Lodge and certainly the place divides opinions. It’s narrow, tight and twisty round the early part of the lap before opening up a bit down the straight. Many moons ago we used to go to Birmingham Wheels which was described somewhat tongue in cheek as our ‘Monaco’. Red lodge is a more than worthy successor to that sobriquet. Besides which it adds to the variety of the Championship and the off track facilities are very good too. The weather continued to play its part for the Lightweights and Heavyweights/Super Heavyweights in the afternoon. How much drama could we expect after an exciting morning? Here’s how it played out.

Super Heavy Nick Trafford topped the times initially in Group 1 from Adam Brown before Michael Ballinger swept both aside usurping them by over a tenth. Martin Gurnett too demoted Brown but couldn’t quite get beyond Trafford’s time missing out by just 0.030. Clay winner Mike Bodnar was fifth fastest whilst Andy Cowell suffered a technical failure and was allowed another short run in the second group. It mattered little. 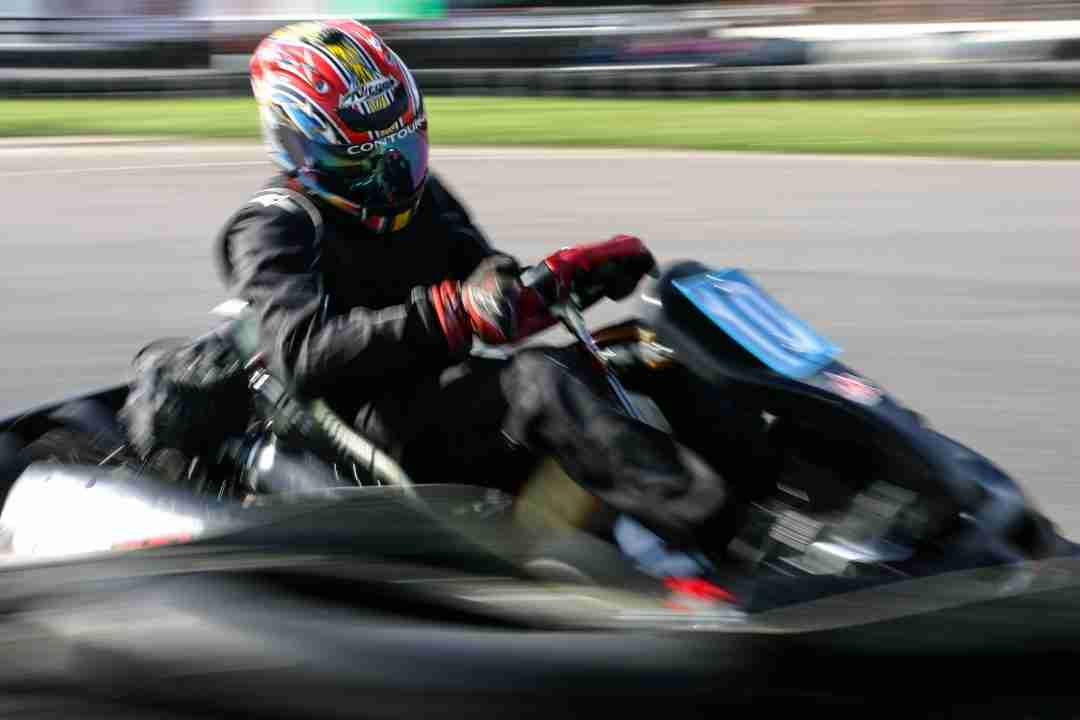 Tim Hill was initially quickest in group 2 and looked like staying there until Championship leader Mark Ridout found his rhythm setting the best lap on his fifth flyer to edge out Hill by 0.061. Adam Wright wound up third quickest having set his best time on his first flying lap. James Browning left his best until his final lap. Having languished down the order he finally made it up to fourth but it would only be good enough for seventh on the grid. And he desperately needed a good result to prevent Championship leader Ridout from extending his lead.

Championship leader Ridout on pole from Hill with Ballinger and Super Heavyweight Trafford on row two. A fine effort from both these drivers. Gurnett and Wright on three from Browning and Brown on four with Bodnar and Dawson completing the top ten. Ridout led the field away but it was Ballinger into second as they exited the first hairpin with Hill third from a fast starting Wright. Trafford dropped to fifth with Browning up to sixth. By the end of the lap Ridout was already pulling out a gap to Ballinger who was defending from Hill. 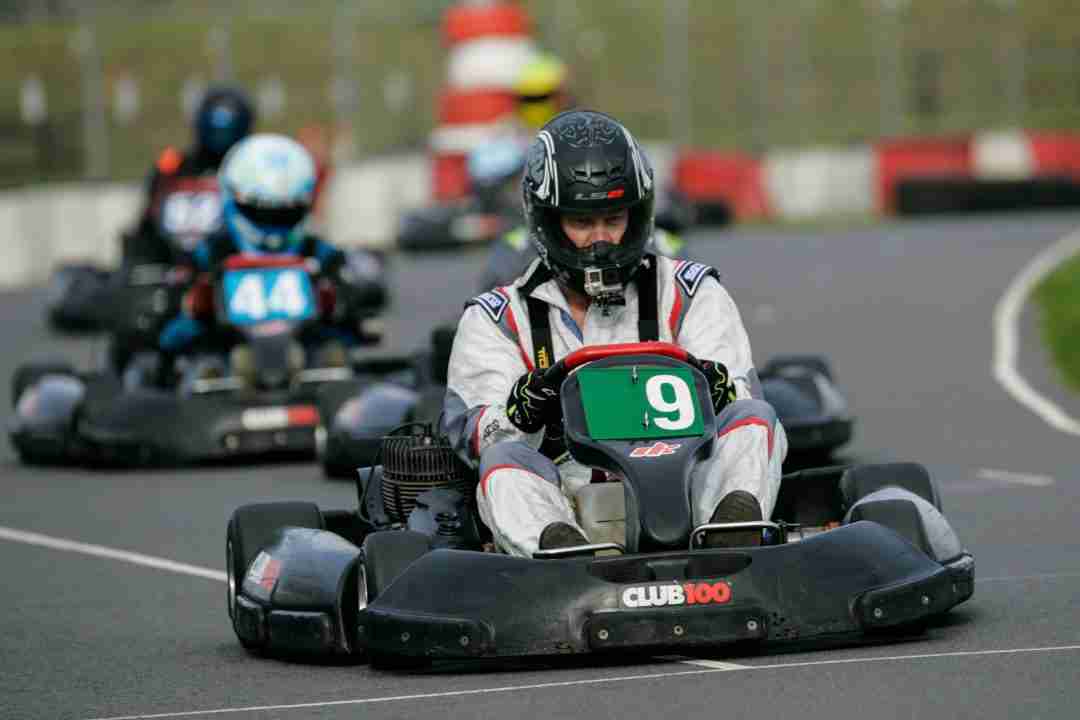 As the leader came down towards the final turn he’d increased his lead. Unfortunately Aaron Stevens and Andrew Clarke had tripped each other up on the exit of the final turn at the end of the first lap. The pusher Karts were quickly on the scene but Clarke’s machine was across the track at an angle and the pusher couldn’t get the lift under the bumper. When he did it only served to nudge the Kart round further blocking the track. The leader arrived with a decision to make and chose the inside line just as Clarkes’s Kart nudged forward stopping the leader dead in his tracks. Stevens meanwhile had been pushed out of the way allowing Ballinger to lead the field round the outside and safely by the incident. It seemed like an age before the pusher got back to Ridout who resumed in twenty ninth. He would set a succession of fastest laps before achieving fastest lap, and a record, on the final tour. At least he’d be on pole for the Final. 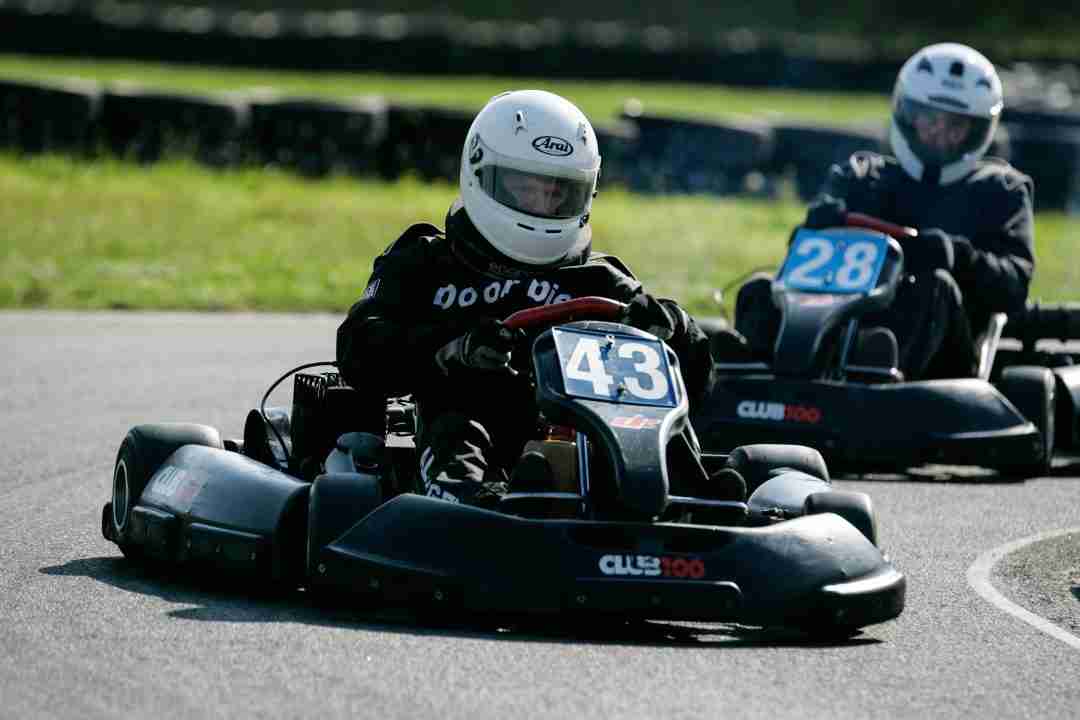 At the front Ballinger finally succumbed to the pressure from Hill and was now having to contend with the attentions of Wright, Browning and Gurnett. Trafford had dropped to sixth and was beginning to drop away from the front five as he fended off Dawson. Hill continued to lead and was edging away from the fight for second still headed by Ballinger. But at two thirds distance Ballinger finally succumbed and dropped to fourth. Wright and Browning immediately set about closing the leader down. But Hill had enough in hand and took the win from Wright and Browning with Ballinger a very good fourth ahead of Gurnett. Trafford held off Dawson for sixth with Foulds, Bodnar and Cowell completing the top ten.

The final race of the day with all the Championship hopefuls at the sharp end of the grid. Ridout on pole with Browning alongside. Wright in third with Hill on the dreaded grid four. Ballinger and Gurnett on row three with Dawson and Bosley on row four. Trafford and Craig Rankine completed the top ten. As the field formed up Poleman Ridout almost spun as he weaved to warm his tyres. Fortunately he got away with it and resumed at the head of the pack. 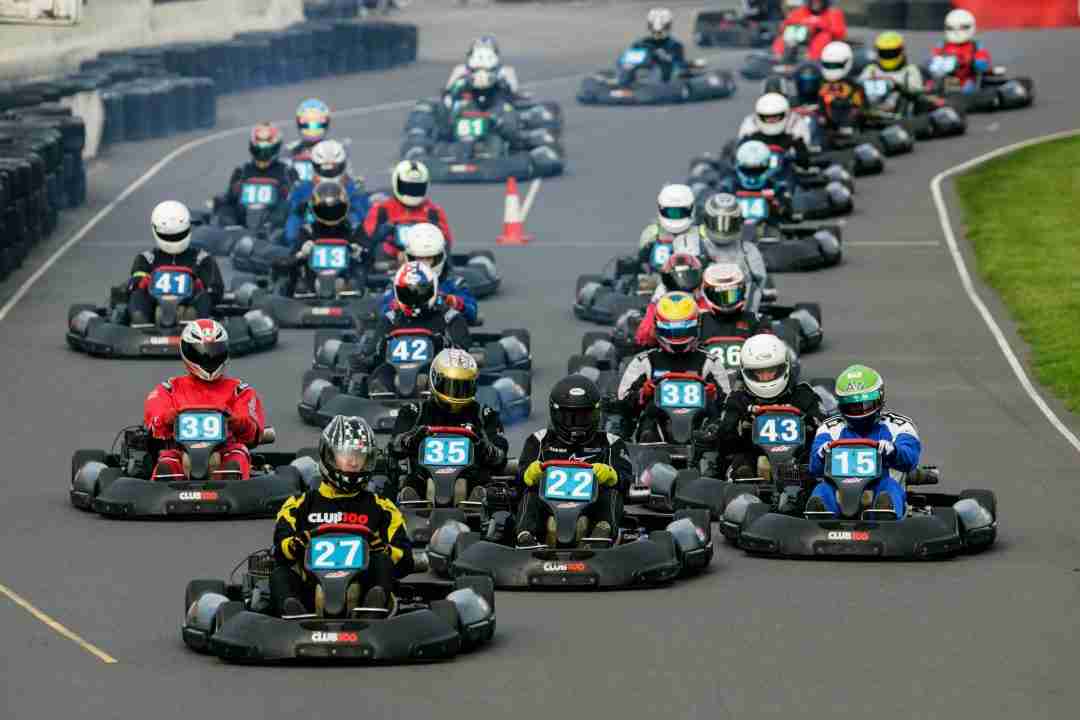 Off the line he was ahead whilst Browning immediately moved left to cover off Wright on the inside. Hill had free space in front of him but was still on the outside as the field braked for the first hairpin. Yet again the curse of fourth struck and Hill was stationary on the outside of the turn. Cruel luck as he felt he had a machine capable of victory. He would resume in twenty eighth and would eventually finish sixteenth. It’s fair to say he was not a happy Karter after the race. Bosley too was an early casualty spinning to back of the field. Ridout quickly began to pull away at the front from Browning and Wright whilst Ballinger settled into fourth ahead of Trafford and Dawson. Ridout continued to lead from Browning and Wright with Ballinger fourth but off the pace of the front runners although clear of Dawson who had slipped by Trafford at one third distance. And that was how they stayed to the flag. But it was not without a touch of drama. Wright did get by Browning on a couple of occasions but later round the lap Browning would snatch the position back to keep the status quo. As the leaders came upon the first backmarkers they all managed to get by without too much trouble but as they rounded the final lap they were closing in on two more. 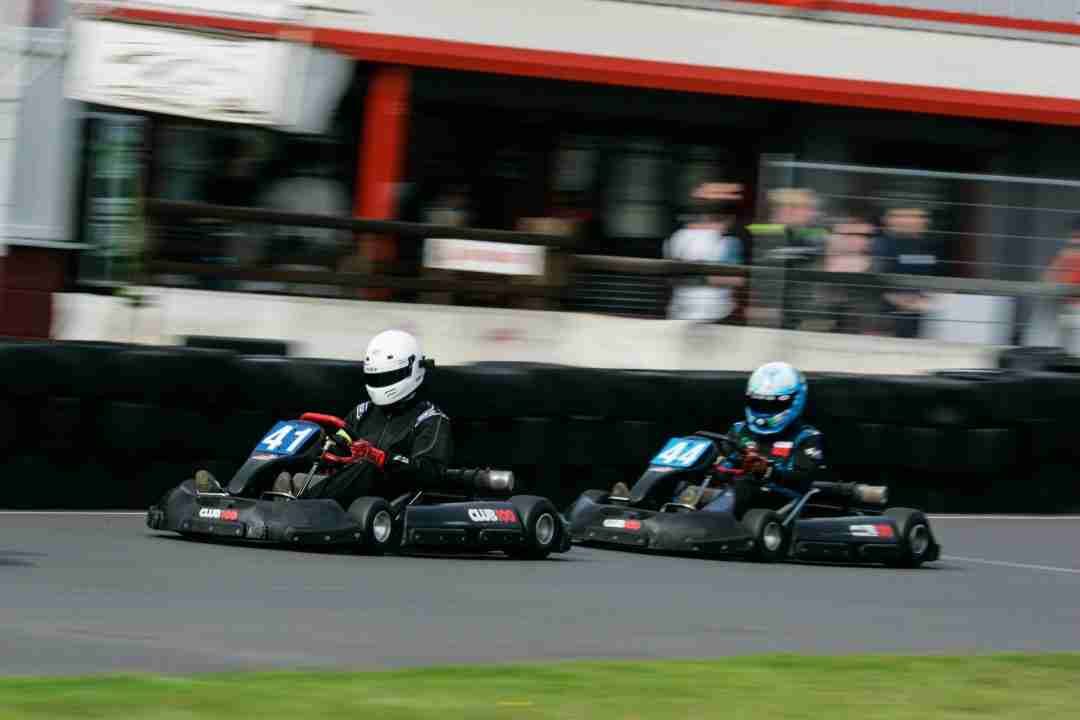 And this time the blue flags weren’t being shown. Out of the last turn Ridout got held up and actually clipped one, possibly unsure of which way to go. Browning and Wright both closed up dramatically but Ridout made it across the line by just a couple of lengths. One more lap and Browning’s momentum might well have seen him into first. He though was full of praise for Ridout feeling it was a well deserved win. Wright was only a tenth adrift of Browning at the flag with Ballinger fourth for his best day of the season. Dawson was fifth from leading SHW Trafford in sixth with Cowell next from Williams, Gurnett and Rankine. A good battle this with the four of them separated by just a few tenths.

Top three finishers and top three in the standings. I’m sure Mark Ridout was pleased to see the back of Red lodge with his Championship lead intact whilst James Browning is still well in touch. And don’t discount Adam Wright just yet either. He’s not stood on the top step this season but he keeps racking up good points finishes. The glass ceiling is there to be broken. Nick Trafford took the SHW honours and was a fine sixth overall. He also leads the SHW class. 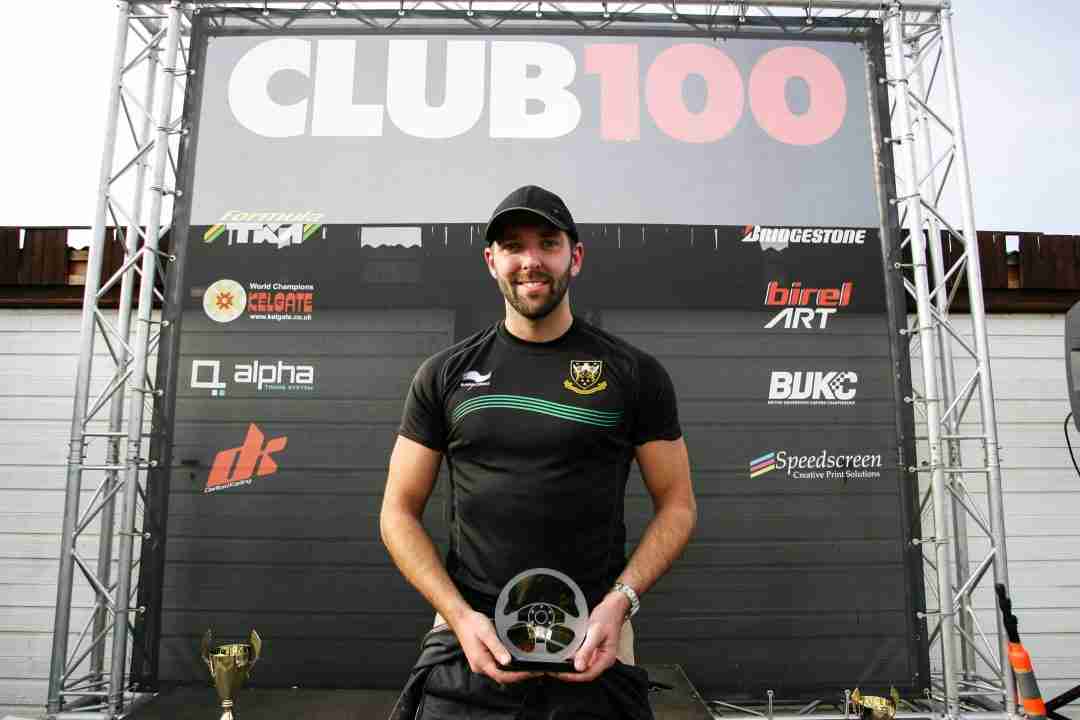 There is no doubt whatsoever in my mind as to who gets my Driver of the Day award. There’s no trophy but it still has to be earned. Take a bow Dan Healey. How gut wrenching it must have been to have such a huge lead in the Elite final only to lose out because of a very rare mechanical failure. Yet in defeat I think he gained so much. There were no histrionics, No toys out the pram just a quiet acceptance that fate had intervened. For a young man, indeed for anyone, to remain calm under those circumstances takes some serious self control when you are as dedicated to the sport as he is. His attitude humbled many and whilst he lost the race he has gained huge respect amongst his peers. I’m sure mum Jo is very proud of you anyway no matter what so I’m not going to say you made your mum proud. But you did! It was no surprise to see a few tears from her on Sunday. We all want our kids to do well and I’m pleased she was able to smile a little later. Dan’s day will surely come. Hats off too to Mark Ridout. He too remained calm after the incident in the pre-Final took him out of contention. Again, no drama, just get back out there and get on with it. 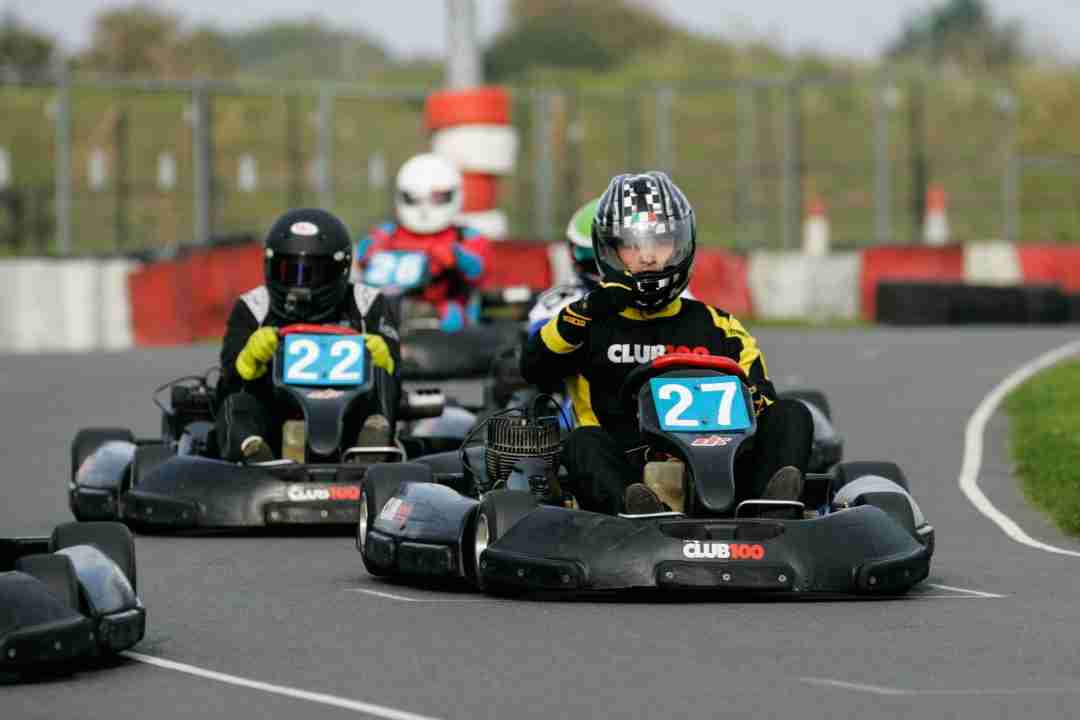 Red Lodge certainly divided opinion. Yes it’s narrow. Yes it’s twisty and not the easiest place to overtake. But isn’t that part of the challenge? Does everything have to be fast, flowing and relatively easy?

A reminder too about the correct procedure after spinning off. Get your Kart back on the track and facing in the direction of travel. Then the pusher Kart can get square on to the rear bumper and there is no danger of being pushed across the track and causing a dangerous obstruction. Safety is paramount. Like putting your foot on the brake no one should really have to be reminded of this simple action.

I travel to most Kart events in my faithful old work car Monty the Mondeo. He’s travelled the neck end of 300,000 miles. When I get in it’s like putting on a comfy pair of old slippers. He is my mate. Like me he’s beginning to show his age but he never lets me down. Imagine the horror then when a tree jumped out in the car park at Red Lodge and whacked his rear bumper. Of course I remonstrated with the tree but it just stood there and refused to answer. Well, I thought it was a reasonable excuse to give my wife inspired by some of the excuses we hear at meetings. Didn’t cut any ice though. Dan Healey, Mark Ridout, Tim Hill and Darri Simms, I share a little of your pain..

Just three rounds left of this absorbing season. It’s getting exciting. See you all at Whilton! 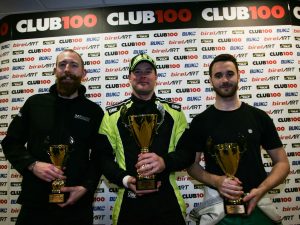 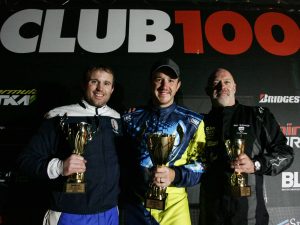 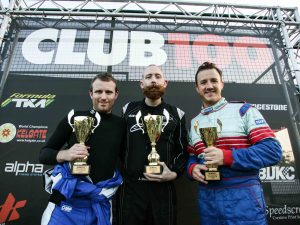 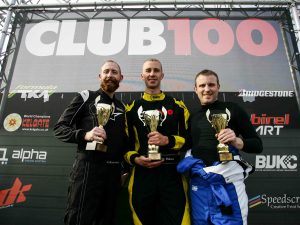 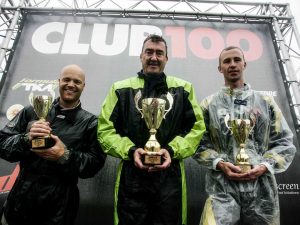 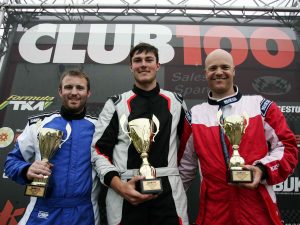 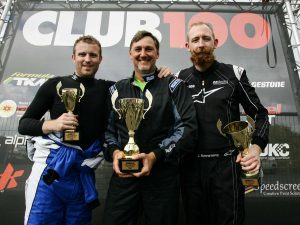 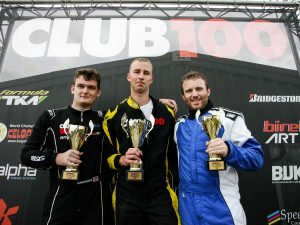 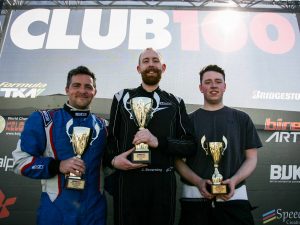