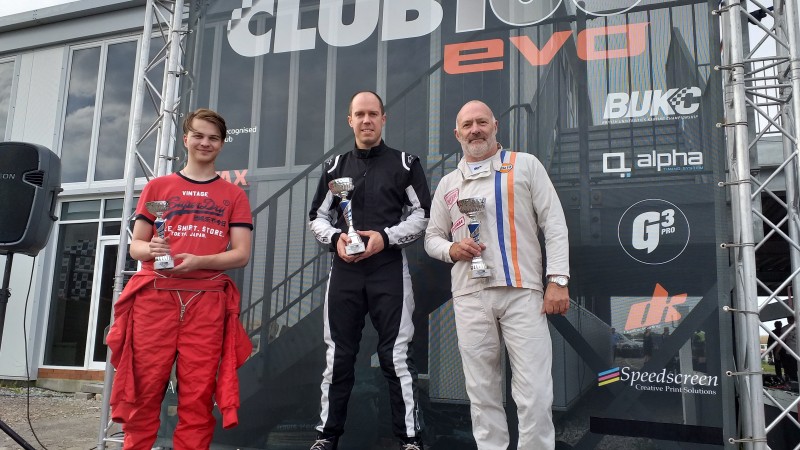 Stuart Martin does the double

Matt Edmondson-Jones looked to be back to his early season best as he claimed pole position for race one. Stuart Martin joined him on the front row with a time only two hundredths of a second slower. Row two was made up of Tom Szwed and and Jack Noller. Tim Hill was fifth with Richard Allen sixth and fastest of the super heavyweights. Alex Pritchard was the second fastest large chappy in twelfth and Chris Dean third of the pie eaters in rwentieth. Out of 33 runners, the top 28 was separated by less than a second. Club100 really is amazing.

The front three maintained their position for the opening lap. Tim Hill demoted Noller to fourth. Nuno Costa, Steve Jennings and Seb Algieri all made up one place at the expense of super tubster Richard Allen. He nevertheless maintained his lead in the aforementioned pie eating class. Daniel Russell was the biggest first lap casualty, dropping to dead last after a coming together.

The top three remained unchanged for the opening ten laps. Edmondson-Jones continued to lead Stuart Martin and Tom Szwed. However, Martin had picked up the pace and had got the lead down from just over half a second to a few tenths. The tailwind down the back straight made for some great passing throughout the day and Martin managed to slipstream the race leader and snatch the lead on lap 13. Tim Hill likewise got past Szwed for third at the same time. There was a bit of a gap behind this battle. Jennings and Noller were both having a solid race. Richard Allen was behind them in seventh but just about in control of the cuddly club class. He had Gerard Moore, Seb Algieri, the racy looking Phil Kendall and Alex Lammin right on his tail. Second of the chunky chaps, Alex Pritchard, was on the tail end of this train. Sadly, Allen wasn’t able to keep the train behind and he was soon bumped down the order and into second. However, the train of ten karts from 7th to 16th was incredibly close for much of the race.

The battle at the front wasn’t quite as frantic but no less exciting. Martin continued to lead from Edmondson-Jones and the gap fluctuated as they negotiated the traffic. Hill had built a half a second cushion to Szwed by three quarters distance. The latter coming under pressure from Steve Jennings.

The last ten laps saw the battle for the lead intensify as Martin and Edmondson-Jones passed and re-passed each other lap after lap. Edmondson-Jones took the lead coming into the last lap but a decisive move by Martin saw him snatch the lead on the final lap and take the victory. Hill came home an impressive third ahead of Tom Szwed and Steve Jennings. Noller and Andrew Hall Jr scored some useful points. Gerard Moore, Nuno Costa and Seb Algieri completed the top ten.

Sadly for Matt Edmondson-Jones, he was handed a four place penalty for ABC and a further one place penalty for indecent assault on a cone. This demoted him to seventh and promoted Tim Hill to second and Steve Jennings to third.

The paunchy class win went to Richard Allen. Pritchard had led for a time but ultimately didn’t quite have the tubby legs. Tarik Almou finished third.

Richard Allen was a few tenths behind this battle and comfortably leading the super lardy boy class. He had Hall Jr, Jack Noller, Gerard Moore, Nuno Costa and Seb Algieri between himself and second placed Alex Pritchard.

By lap 8 Martin had built a comfortable one second lead over Szwed. Hill got back past Edmondson-Jones for third – the latter then suffering a wheel bearing failure at the second chicane later in the lap and dropping to the tail of the field.

There was a close battle going on in the mid field. Phil Kendall, George Watson, Barney Langley, Tarik Almou and Alex Lammin were all running nose to tail. In fact all throughout the field there were close wheel to wheel battles due to the closeness of all the equipment.

By half distance Stuart Martin still led. Tom Szwed had caught up slightly but was himself under pressure from Tim Hill. Once Hill got past, Szwed then found himself being harassed by Steve Jennings, Andrew Hall Jr and Jack Noller. Moore was a second further back but with a solid gap to Algieri and Costa.

Richard Allen continued to lead the curvy boy class. Alex Pritchard was still second with a huge gap to third placed Tarik Almou. Chris Dean seemed off colour again in this race and was a distant fourth, holding off Paul Goddard. Richard Newton and Peter Gillett made up the remainder of the stout brigade.

A combination of traffic and Viagra had allowed Tim Hill to close right up to Stuart Martin over the second half of the race. By lap 27 he had brought the gap down to a tenth of a second and was poised to make a move. With Tom Szwed right on his tail as well the last few laps looked like being extremely close.

Lap 29 saw Hill make his move. The opportunistic Szwed also nipped past and into second place. A lap later and Martin was back past Szwed. The following lap he dived down the inside of Hill and retook the lead. With this trio battling hard for the lead it allowed Hall Jr and Noller to close right up.

The battle for the super heavies was hotting up in the dying laps. Pritchard had brought Allen’s lead down to less than half a second with just over three minutes of the race remaining.

Tom Szwed made a move on Martin for the lead on lap 37 with a minute and a half of the race remaining. After such a close battle between the top three it was nip and tuck going into the last lap but Szwed managed to hold it together and take the win. Stuart Martin finished a close second and Tim Hill a more than credible third.

Richard Allen just managed to hold off the charging Pritchard for the super heavyweight win. Tarik Almou came home some way behind in third.

With Tom Szwed not being eligible for points, the overall win went to Stuart Martin who took a maximum score. Tim Hill scored a fine second place and a delighted Jack Noller came home third. The superheavyweight win went to Richard Allen with Alex Pritchard and Tarik Almou joining him on the podium.

Stuart Martin now leads the points standings. After an off day for Andrew Hall Jr and some bad luck for Matt Edmondson-Jones, the title fight is still wide open. Never count out Tim Hill either, and Jack Noller could always spring a surprise or two. 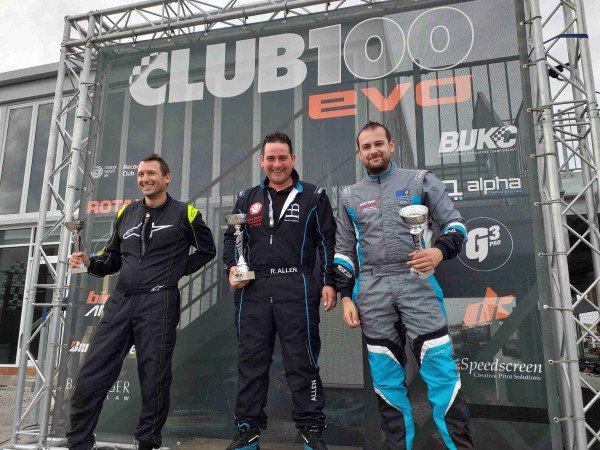 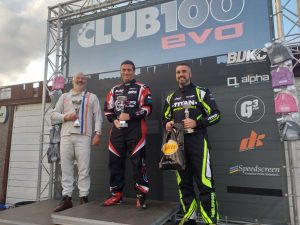 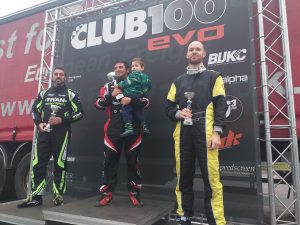 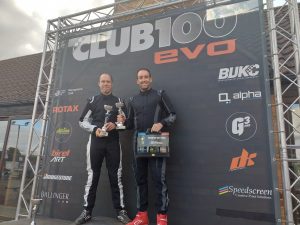 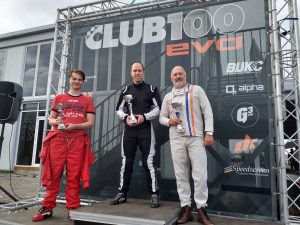 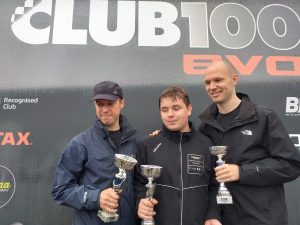 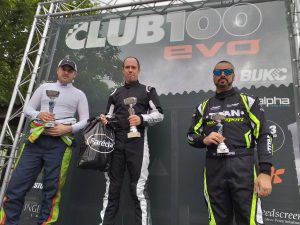 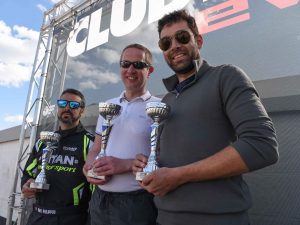 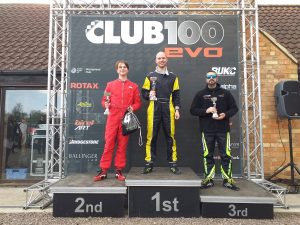 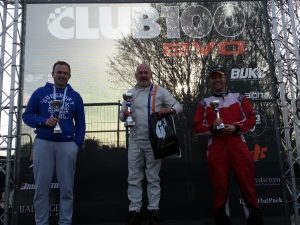 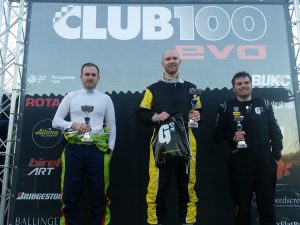