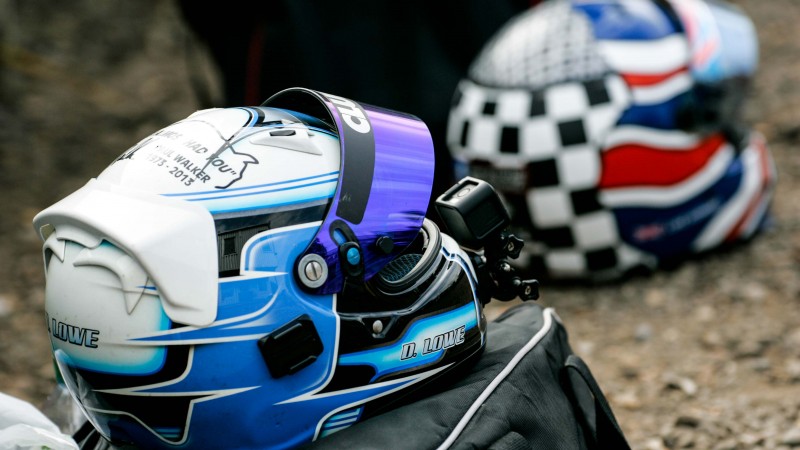 Rye. The home of British Karting. A proud boast from another iconic track. Is it the Karting equivalent of Monte Carlo with the canal as its backdrop? Probably not. Great track though and good for spectating too as its compact nature allows for a view of the whole circuit. It’s one of the oldest Kart circuits in the country and is, as most people are aware, the circuit where Lewis Hamilton was first introduced to motor racing. Like many circuits it’s getting ready for some re-surfacing and it’s a pity about the permanently wet infield which can lead to water being dragged on to the track. But then, that’s part of the challenge. For the third round in a row the weather was overcast and cold with a threat of rain later in the day. A day for the spectators to wrap up well. Or hide in the Clubhouse!

William Topp on pole with Martin Theodorou alongside. Mathew Forkes and Darrell Lowe on two from Liam Cochrane and Whilton winner Stephen Jennings on three. In the pre-race briefing JV had warned all the drivers regarding cone abuse particularly into Pylon corner. Unfortunately several drivers didn’t listen, the upshot being that this became a heat that the frontrunners contrived to try and lose. Forkes got a great start from the second row to lead by the end of the first lap chased by Topp, Theodorou and Cochrane whilst Lowe got hung out to dry round the outside of Stadium and dropped to eighth. Jennings was up to fifth and harrying Cochrane for fourth, duly moving ahead on lap three only to fall back again the following lap. Forkes still led from Theodorou with Cochrane now up to third from Jennings with Topp dropping to fifth ahead of Frankie Hedges, up from tenth. Then the penalties started appearing on the digi-board at the start and finish line. First up, Cochrane. Next, Theodorou. Both now racing knowing that they would suffer a one place deduction. Next number up, the leader Forkes. Only Jennings, running fourth, had escaped censure. And closing in was Hedges having deposed Topp for fifth. With three to run he was on Jennings bumper and by the start of the penultimate lap he was into third taking full advantage of Cochrane and Jennings slowing each other up as they battled for position. Behind this battle was Andrew Dawson. Having fought his way up from grid sixteen he ran in ninth for several laps behind Topp, Lowe and Simon Lloyd before vaulting to sixth in the space of a lap. Not without incident though, contact being made and the resulting four place deduction dropping him back to ninth. And then Hedges, running third, also picked up a penalty. After sorting through the rule book Forkes was credited with the win from Hedges with Theodorou third from Jennings and Cochrane. Lowe took sixth from Lloyd with Topp next from the penalised Dawson. James Martin completed the top ten whilst Jon Watkins set the fastest lap on the final tour.

Hedges on pole for this one from Watkins. Townley and Martin on row two from Stefan Scully and Luke Hornsby with Dawson and Mark Ridout on four. Championship leader Sammy Venables was on five and hoping to kick start his day with Topp alongside. Hedges led the field away but Watkins got forced wide round Stadium. He would be down to twelfth by the end of the lap. Townley though was looking really pacy and was into first by the end of the lap ahead of Hedges with Hornsby up to third. Townley still led but was coming under pressure from Hedges, Hornsby and Dawson, the latter having fought his way quickly up from seventh. Not without incident though as he had clipped a cone. Townley couldn’t hang on at the front and after running wide he slipped out of the lead, falling back to fourteenth over the space of two laps leaving Hedges to take over at the front. Hornsby was pressing the leader hard but got a bit too ambitious into the hairpin and lost momentum dropping to fifth behind Dawson, Scully and Martin. Hedges wasn’t getting away at the front and with three to run Dawson took over at the front. But he’d clipped another cone in the process. Scully took over at the front and quickly pulled a small gap as the rest fought over second to take the win by just over second. But it was Martin who took second with Dawson right on his bumper but dropping two places as a result of his penalties promoting Hornsby into third with Hedges fourth having missed out badly over the final lap. Venables was next heading home, Topp, Cochrane, Forkes and Lowe.

There was just a hint of rain in the air for the final heat and the track surface had certainly become slightly slippery causing the drivers to be a little wary as they rolled round for the start. Stuart Osborn had drawn pole with Venables alongside. Lloyd and Ridout were behind with Christopher Powell and Dawson on row three from Jennings and Hornsby with Cochrane and Scully completing the first five rows. Venables got the better start to move ahead of Osborn but Lloyd, Ridout and Powell were already in the wars, Lloyd dropping to sixth as Ridout spun out. Cochrane too was down to the back of the field whilst Dawson, Jennings and Hornsby moved rapidly up the order. Venables continued to lead with Dawson into second but carrying a penalty, again for cone abuse, whilst Jennings ran third ahead of Osborn and Hornsby. With three run Dawson was at the front but coming out of Stadium he took too much kerb and spun to a halt. As the field took avoiding action Jennings took over at the front taking Lloyd with him into second with Hornsby third and Theodorou up to a remarkable fourth. Starting from grid fifteen he’d steered clear of trouble to move up to eighth after three laps and then into fourth following Dawson’s demise. The leaders settled into a rhythm with Theodorou still fourth but with Lowe closing him down and then moving ahead with just two to go. Jennings had pulled well clear at the front but Lloyd was having to defend from Hornsby who caught a wet patch in the first turn and lost momentum dropping him to seventh and defending from Theodorou who had lost out to Scully and Cochrane who had put in a great recovery drive after dropping to seventeenth after one lap. Jennings took the win with Lloyd second a couple of Kart lengths up on Lowe who had Scully right behind as they crossed the line. Cochrane had closed to within a couple of lengths but had run out of laps with Watkins next from Hornsby, Theodorou, Powell and a hugely disappointed Venables.

Pole for Scully with Cochrane alongside. Jennings and Lowe on row two from Forkes and Theodorou on three. Hornsby and Lloyd on four, Martin and Championship leader Venables completing the top ten. Scully made a clean getaway but Cochrane got muscled out around Stadium allowing Jennings and Lowe into second and third respectively. Forkes ran fifth with Venables next after a lightning start. Theodorou spun away his chances whilst Hornsby and Lloyd both dropped back and out of contention. Scully settled into the lead pulling away slightly as Jennings fended off the attentions of a very feisty Lowe with Cochrane still fourth. Venables got ahead of Forkes but not without contact. A lap later his chances of a decent finish evaporated as he spun out. Lowe moved into second at half distance and began to hunt down the leader as Jennings dropped away. Cochrane was still fourth but under pressure now from a flying Watkins who had progressed from grid twelve. With eight run he was past Cochrane and chasing down Jennings. It took him just two laps. Lowe meanwhile was into the lead. Coming out of the first hairpin he got better traction to ease past Scully for the lead. Watkins was really on it and closing in rapidly on the front two but there were not enough laps left. Lowe took his maiden Clubman’s win by just under a second with Scully holding on to second by just 0.097 as Watkins set the fastest lap of the race on the final tour. Cochrane passed Jennings for fourth on the final lap with Dawson sixth after a frustrating day. Martin was next on the road but penalised for cone abuse dropping him behind Forkes whilst Ridout and Hedges completed the top ten.

Stephen Jennings is now top of the standings from Stefan Scully and Jon Watkins. Just six points separate the three of them. Sammy Venables drops from the top of the order to fourth after a bad day at what is his home track. He’ll bounce back. Andrew Dawson is fifth.

An exciting mornings racing for the Elites and Clubman’s so how would the Lights, Heavies and the EssexFlatPack Super Heavies fare in the still bitterly cold weather for the afternoon entertainment?

A day for a few firsts. A first Clubman’s win for Darrell Lowe. A first win in the Lights for James Venning. A first win for Seb Algieri in the Heavies and A first SHW win for Paul Williams. Great to see the joy spread around.
Will it ever warm up? With a month to go before the next round at Shenington JV has promised that it will. So don’t forget your umbrellas. I confess that I was so cold at Rye that I didn’t spend as much time in the paddock as I would have liked instead opting for the relative warmth of race control. A very interesting experience listening to all the radio chatter and watching just how much work goes into making the days racing so successful. We saw some very good marshaling too at Rye. They were very alert and used the blue flags when necessary to good effect. A couple of points to note. It was a little disappointing to see several drivers throwing the front end of the karts down when things hadn’t gone right. Don’t blame the karts. They are not at fault and should be loved and cherished. Also, let’s not forget the golden rule. When you spin off, get your foot on the brake. No one should need reminding of this.

See you all at Shenny, the Club’s first visit for eleven years. It’s good to have a change!! 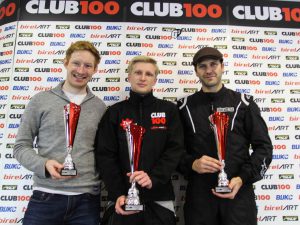 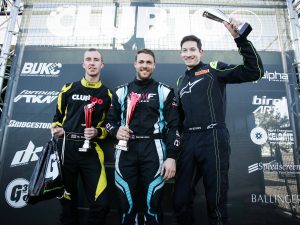 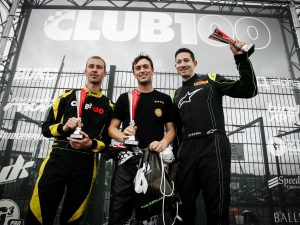 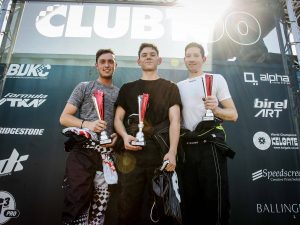 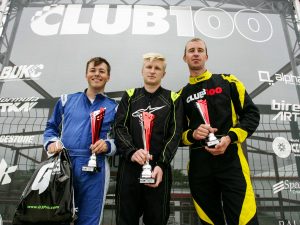 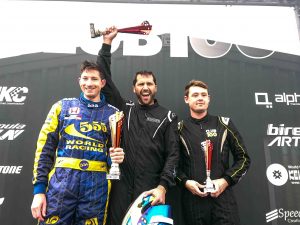 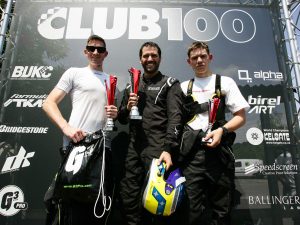 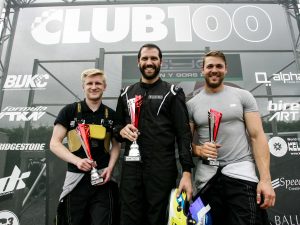 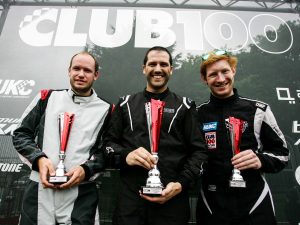 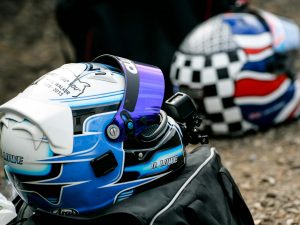 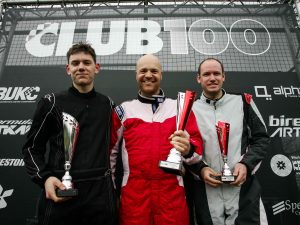 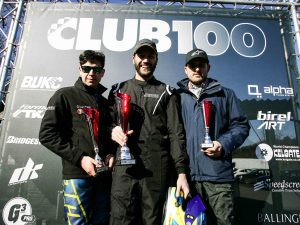