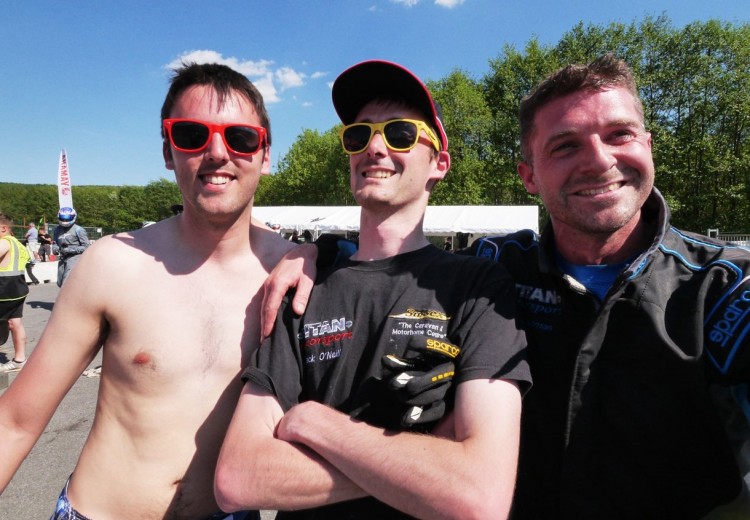 First a message from John Vigor

After reviewing the results from the weekend, it has become apparent that the tie break between Premier Class teams Racecraft and Farecla G3 Pro is incorrect. The auto tie break was applied on the results from round 1 (4x 30min races) rather than all four rounds overall as intended and included in the published rules.
Farecla G3 Pro won a round, scoring 100 points, which awards them the higher position.

I would like to offer my sincere apologies to both Racecraft and Farecla G3 Pro for the oversight on our behalf.

No excuses, we thought we were sure that the result was correct, but every machine (spreadsheet) still needs a human double check, and a time for a triple. Our Bad. It’s On Us.

There’s only 1 Spa 10 Hour. The Decathlon of Karting. And damn if it was not on one of the hottest weekend’s anyone can remember for Club100.

The Elite Class almost played out as expected aside from last year’s champions Tanked Up G3 Pro Racing (Teal-Harding-Lisseter) who’s Saturday had started badly, Round 1 in the morning best 3 results of 4 x 30min, no pit stop sprint races set the tone for their weekend on track fortunately off track made up for it. Maybe. They had partied hard. Their performance hardly improved in Round 2, in the blazing heat of the afternoon’s best 2 of 3 x 1 hour enduro pairs, 1 driver change/fuel stop races. Their 10hour only really got going after the downpours in Round 3 , a 5 fuel stop, 2.5hr team endurance on Sunday morning. By the time we reached Round 4 the final 2.5hour team endurance they were racing for fun, and then of course went and won the last race. And they do serve to explain the format.

So the former champions left with some satisfaction to go with monumental hangovers, from a good time off track, and 6th place overall at the finish. 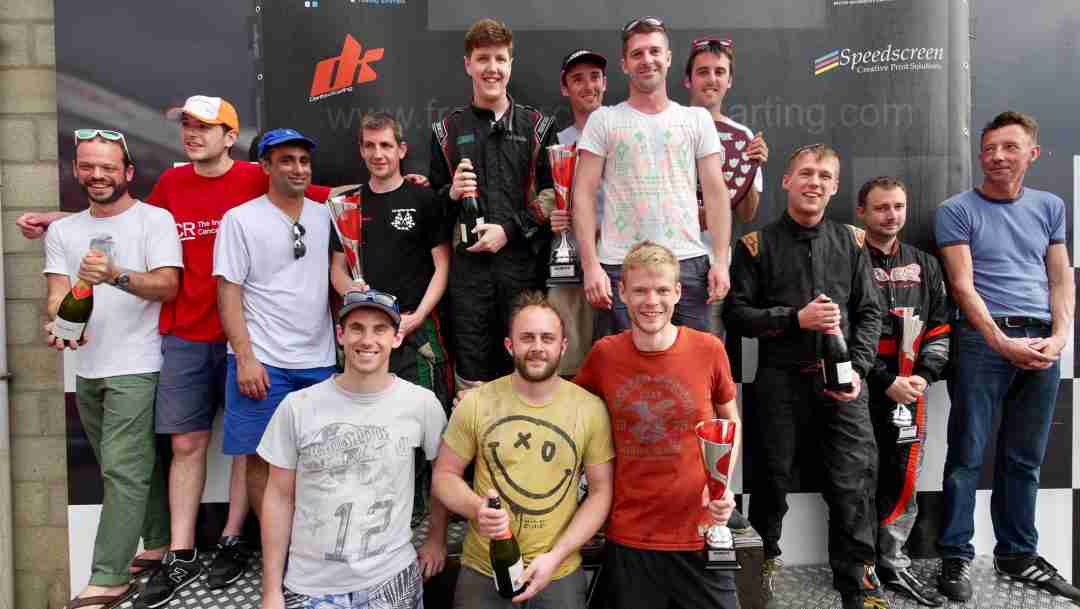 The other likely front runners were more on it as expected. Runners up last year’s Ministry of Speed (Blake-Hill-O’Connor-Nijjar) we’re just like last year, still out on the town with Tanked Up but always in contention and leaving all the bad luck on Tanked Up’s side of the Banter Bus. Owen Jenman had led Titan Motorsport (Jenman-White-O’Neill Bros) back to Spa after finishing 3rd last year, and it was clear that though they are a very family orientated team, they had come well prepared and well organised and focussed on taking the top step. In true captain’s style, he had led by example, setting the tempo, winning the first race of the weekend, in the solo section, this had been followed up by a win for Andy O’Neill had of Ministry’s Ian Blake in Race 2. The Ambassadors’ (McCullough-Newman-Yeomans) Kieran McCullough won the last race of the morning from pole position and Titan squeaked the round win from them on tie break by 2 wins to 1. Round 2 was won by Ministry of Speed, again on tie break from Ambassadors with Titan only 5th in class. However Titan were well placed sharing the lead on points with Ministry of Speed with The Ambassadors 10 points (or 2 positions in reality) at halfway. It was hard to look passed these 3 teams for the champions. 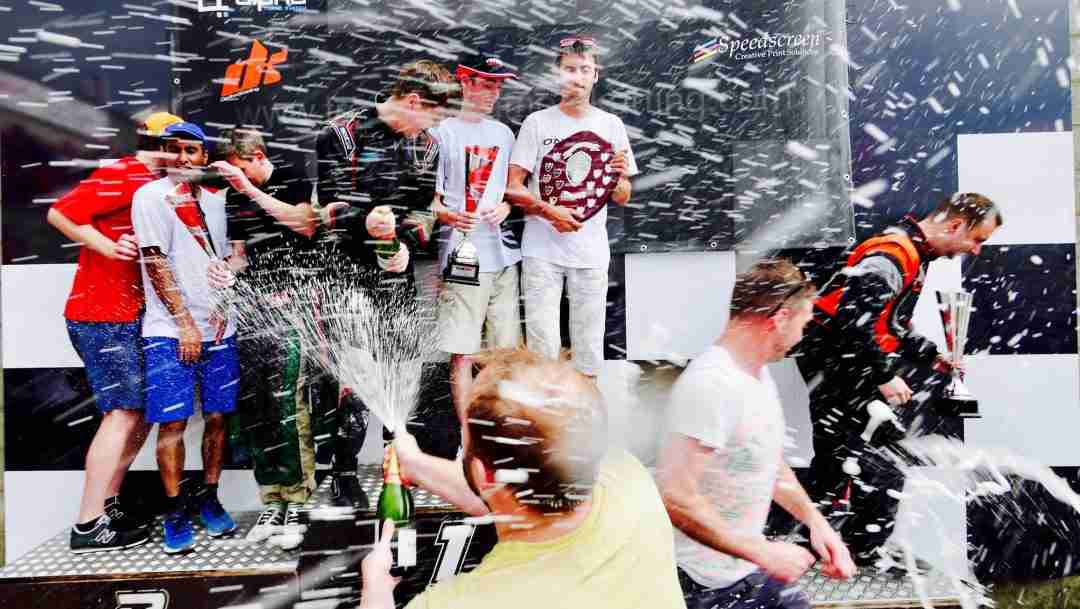 Spa’s evil weather twin arrived on Sunday (‘it always rains at Spa’) and that changed the game, if not the results. Class always rises to the top. Jenman drove at least the first 4 stints on Sunday morning during the worst of it, without missing a beat to set up Jack O’Neill to take the win in Round 3 ahead of Ministry’s Jordan Hill. The Ambassadors had had an excellent run through Saturday with Rob Newman particularly rapid, driving away from the front of the field on occasion on his debut at Spa. Impressive, but he only had himself to blame for dumping it in the gravel on Sunday morning, in the infamous 2nd to last corner, which has caught out a few (this scribe included) in it’s time in the wet and that really left them too much to do into the final 2.5hour enduro in Round 4. Barring mishaps Titan just needed to stay in the position behind Ministry of Speed to win overall in the last race, even if Ministry were to win that race, Titan finishing on the same points would win the event on tie break of most race wins, assuming it was going to be close, and it was for a while but Ministry could only place 5th at the finish behind Tanked Up, and Club100 Virgins (Barlow-Crease-Dimelow-Faulkner) late run to 5th overall, and 3rd place was more than enough for Owen Jenman, Andy O’Neill, Jack O’Neill and Ed White, to take a popular win, after going close last year, running cleanly and consistently, and without incident for the most part.

Taking the last step on the podium for 4th were Peter Cole, Stephen Hicks with Tom Dix, they remained there or thereabouts through both days in all rounds even if they were not always running in the lead battle for a race, just off the front that consistency brought them a trophy for 4th. Last year’s Premier Class champions The Incrediballs reformed as EuroThrash, Kyritsis-Austin-Williams-Kempnyck and were excellent, for the most part, and worthy of a better result than 7th, and best of the rest (in a nice way) leading races from time to time. 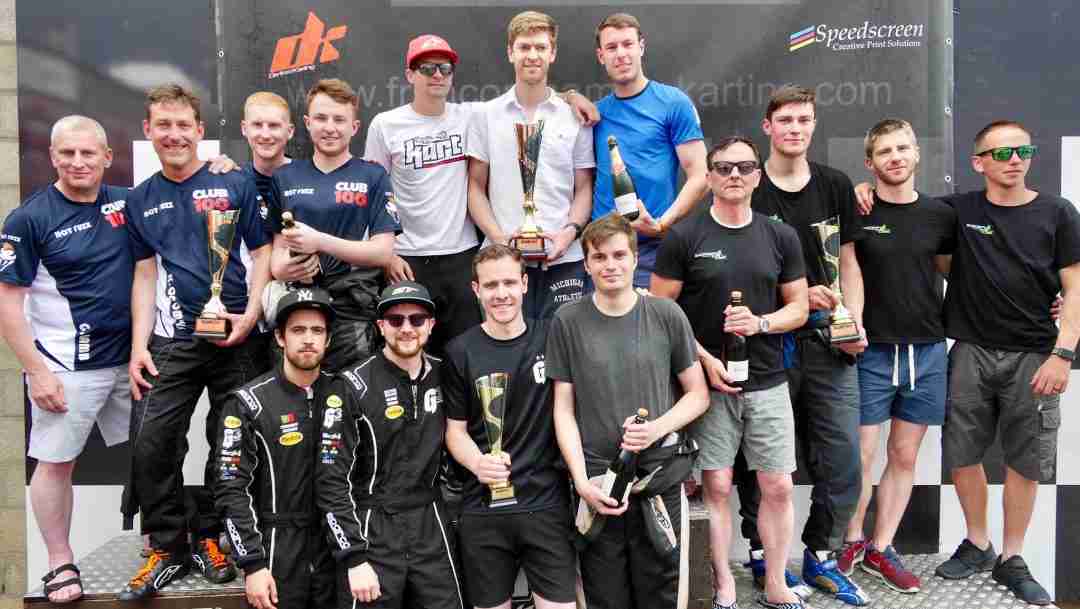 Premier Class was dominated by Lufbra Allstars (Ap-Thomas -Callear-Connell-Dainton) running for much of Saturday in amongst the Elite teams, and only just shipping water with the little things that Elite drivers and teams just happen to do very slightly better, ‘marginal gain’ and all that. Last year’s Clubman Class winners Hot Fuzz (Coombes-Dean-Lamb-Wileman) showed their speed, and that there’s not a huge amount between the classes really, to be within range 20points (4positions in reality) of Lufbra coming into Sunday. Racecraft (Dancer-Dawes-Hattersley-Simms) had had an ordinary Saturday afternoon leaving them a lot to do, and 4 teams ahead of them, Lufabra, Hot Fuzz, Farecla G3 Pro (Burgess-Jones-Moreira-Turner) and Big Cat Motorsport (Edwards-Goodacre-Hubbard-Longman). The latter much to their surprise on Saturday night. Rain changes everything, and like Le Mans and the Nurburgring, “it always rains at Spa”. 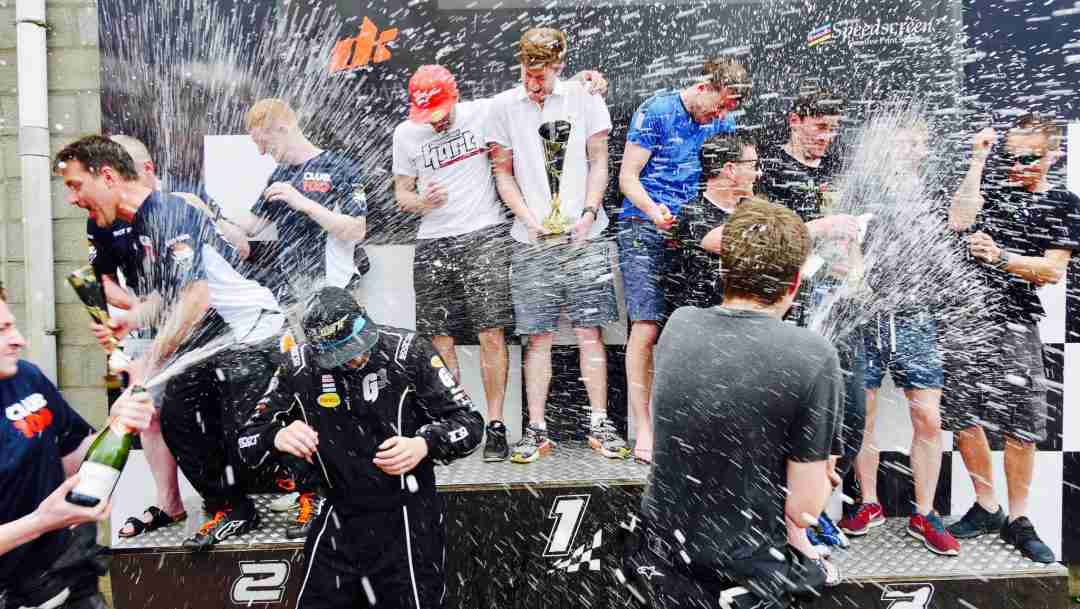 Racecraft could not eat their way through the 4 teams ahead on Sunday and Farecla G3 Pro, after a win on Saturday afternoon had just enough (that win) to take 3rd place on a tie break best result. Big Cat Motorsport missed out on the trophies and Lufbra continued to extend it’s lead to 45points on Hot Fuzz, after a 2nd place behind Hot Fuzz in the morning race on Sunday, and winning in style to finish the event as Premier Class Champions in Round 4. 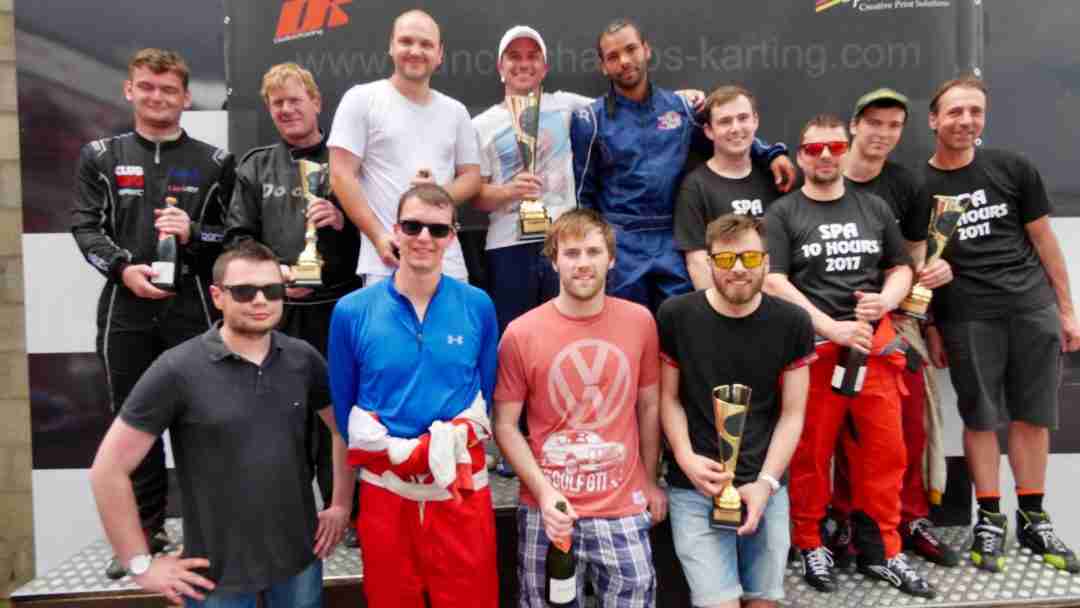 In Clubman Class, Raptors Racing (Stringer-Butterworth-Pickering) led at halfway, after Masta Kinky (Mignon-Daly-Davis-Davis) had led after Round 1, Rapid Robots could not repeat their Saturday afternoon win, and The Undertakers (Ballinger-Benneyworth) who might have finished higher with a 3rd driver or cooler weather, Ben looking particularly wobbly with the heat on Saturday afternoon, moved through from 4th on Saturday night to 2nd place at the finish, which left Belgium’s very own Eric Mignon on the 3rd step of the podium, a win in the last race allowed I’d Like To Kiss Her Apex (Cowan-Couper-Halliwell-Sutherland) to leapfrog Rapid Robots to take home a trophy. 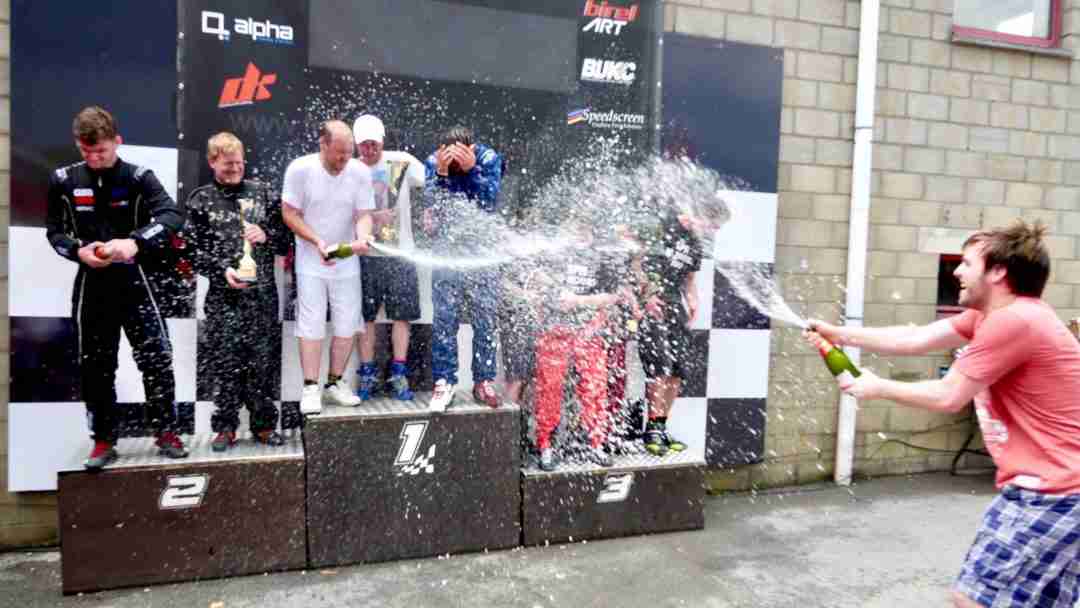 And that was a very hot Spa-Francorchamps 10Hour 2017. 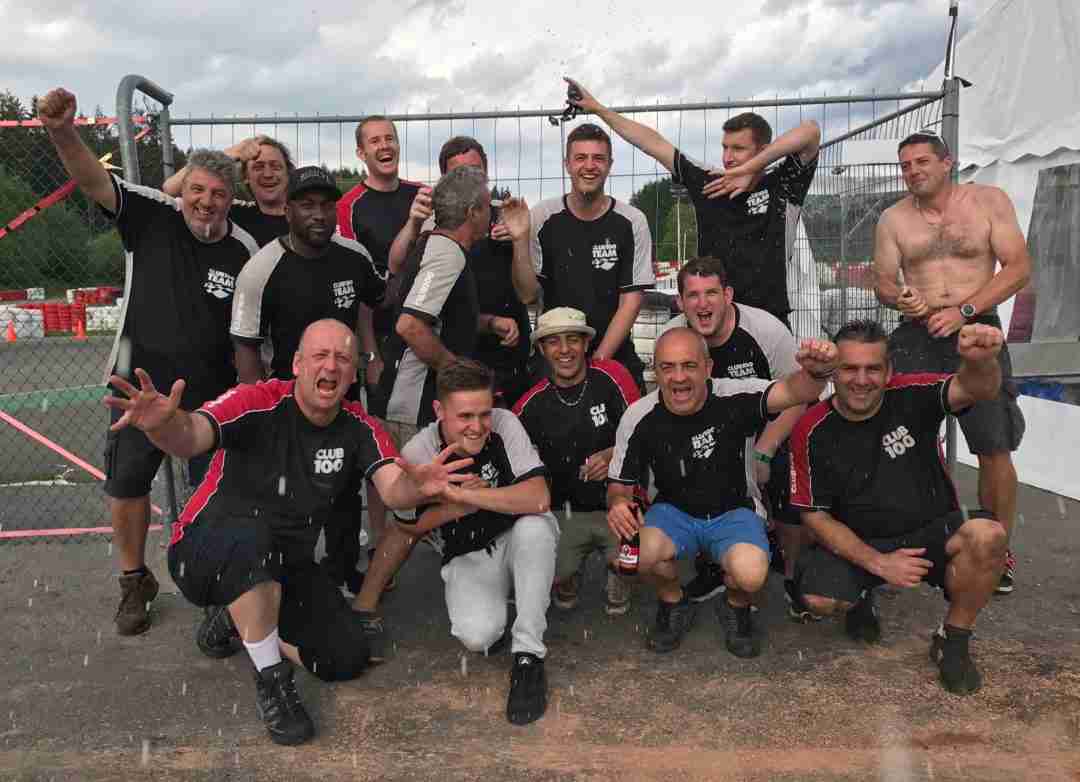 Anyone up for it again? Or is it too soon to ask?